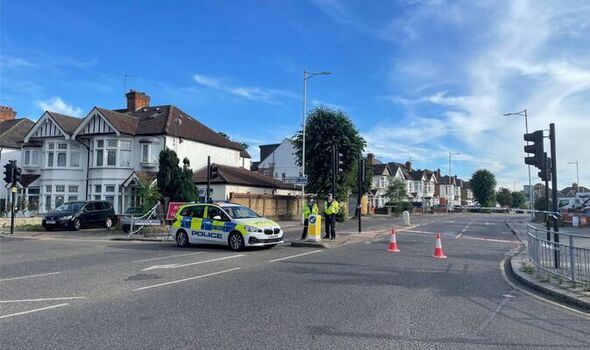 They spoke out as teams of forensic officers scoured the scene, checking drains, hedges and gardens for clues. Scotland Yard said urgent inquiries were underway to track down the attacker and acknowledged the murder was “incredibly distressing” for women living in the area.

The 36-year-old victim was found lying fatally injured in the street in Ilford, east London, at 2.44am on Sunday morning.

She had suffered serious head injuries and was rushed to hospital where she later died.

Srikanth Challapalli, 40, said: “I don’t know what happened. There was nothing suspicious going on on Saturday night.

“But this absolutely makes me worried, of course it does. I’ve lived here four months and now it makes me concerned to go out.

“I often go to the movies at night but I’ll definitely be very scared now.”

Another resident said: “It’s unbelievable, it’s a quiet community, a safe neighbourhood and women feel comfortable going out at night.

“But you hear about this and it puts the frighteners on you.

Police believe the victim was walking along Cranbrook Road, Ilford, towards Gants Hill Station when she was attacked.

She has been identified but detectives have yet to release her name.

Diana Nesen, 82, said: “I came out of my house to find a crime scene. The whole place was cordoned off.

“It’s really a tragedy, you don’t expect to find something like that happening on a road like this – it’s awful.

“We don’t know who she was but she must have been walking to the station early in the morning.

“But the trains weren’t running so maybe she was a local too.

“It does make you feel more vulnerable.

“I hope they catch the killer.”

Police sniffer dogs joined the teams of forensic officers in the search for clues. CCTV footage was being examined by detectives. There had been no arrests. The Yard appealed for anyone with information to get in touch.

Chief Superintendent Stuart Bell said: “Our investigation remains in the critical early stages and is now being led by homicide detectives from Specialist Crime.

“The woman had been subjected to a horrific assault and sadly passed away as a result of her injuries.

“Urgent enquiries have been underway since the very early hours of Sunday morning to identify the woman. At this time formal identification is yet to take place but the woman’s family have been informed and are receiving support from specially trained officers.

“Teams of dedicated officers are working at pace to establish what happened and identify the person responsible. This includes full forensic examination of the scene and the surrounding area, house to house enquiries and a focus on identifying all available CCTV.”

Detective Chief Inspector Mark Rogers, who is leading the investigation, said: “It is vital that my officers speak with every possible witness and everyone with information that may assist the investigation.

“We are appealing for anyone who was in the Cranbrook Road area of Ilford between 2am and 3am on Sunday morning to get in touch, including anyone who drove through the area and may have dashcam footage.

“We also want to hear from anyone who saw anything suspicious in the wider Ilford area overnight.”

Anyone with information or footage, or any witnesses, are urged to call the major incident room on 0208 345 3715.