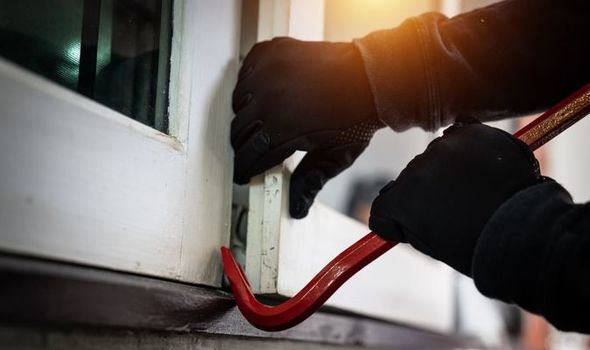 Analysis by this newspaper shows that 158,553 of the 236,418 probes have been filed away without a suspect being identified. The true figure is likely to be even higher as some of the largest forces – including Lancashire and Avon and Somerset – were unable to provide updates.

Figures compiled by home security firm SEMCO reveal the worst force in England and Wales so far this year is Bedfordshire Police, which closed 82 per cent of its 2,701 burglary probes without finding the culprit.

Merseyside Police shelved 81 per cent of 5,861 cases without success, Cambridgeshire Constabulary didn’t find the burglar in 80 per cent of 3,337 crimes, while South Yorkshire also missed out on solving 80 per cent, this time of 10,034 cases.

Lincolnshire Police axed 78 per cent of 2,960 cases without identifying the culprit.

Victims’ groups last night called for burglaries to be a priority for chief constables.

Chiefs have told how they were forced to “prioritise” crimes amid falling officer numbers and rising demand, but said all offences were taken seriously.

Detectives also say there are few opportunities to snare burglars as they will often cover their faces and wear gloves, and many homes will not have CCTV.

If officers take too long to get there, victims may inadvertently clear up evidence that could have been crucial to catching the thief.

But insiders say the main reason officers take hours to get to some burgled homes is because there are too few bobbies on the beat.

The longer police take, the more likely defence lawyers are to claim that the evidence has been contaminated by people “walking all over the scene”.

But if the evidence is secured quickly, sources said, it increases the chances of a successful prosecution.

They also stressed that forces could expand intelligence maps, meaning officers are positioned near hotspots. Detectives can then piece together clues from a scene, such as motorbike noises, and connect them to other crimes, allowing officers to catch serial offenders and close a number of crimes.

The source said: “The crucial piece of evidence may be a footprint. And if it rains we may lose that, so the quicker we get there, the better. Because of austerity, we started to see some forces not deploying officers to domestic burglaries. We would ask a series of questions and if it was unlikely we would find anything to catch the suspect, we wouldn’t send an officer.

“One of the main problems with that is if the victim is not a police officer, they may not know what we are looking for. Now officer numbers are starting to rise, that is starting to improve.

“Chief Constables need to have a really good think about where the priorities are because we are still trying to be all things to all people.”

Sir Michael Barber, who is heading a major review of the police service, said: “These crimes are important to the public and they weren’t prioritised during the period of austerity. Now that is over, they need to be tackling them again.”

In 2018, the Daily Express revealed officers were closing four out of five burglary investigations, three-quarters of car theft probes and nearly half of shoplifting cases without identifying a suspect.

Forces in England and Wales also closed 80.2 per cent of investigations into break-ins without identifying a suspect in 2014/15.

An analysis of Home Office data showed just 6.6 per cent of burglaries led to a charge or summons.

Jeffrey DeMarco,Victim Support’s assistant director, said: “Given that burglary remains a common crime with far-reaching consequences, this simply is not good enough.

“The thought of a stranger breaking into your home can be very distressing, violating your space and compromising your feeling of security. Knowing a burglar is still at large can also cause anxiety.”

He said: “Double-checking windows and doors before you leave, as well as installing CCTV, will deter criminals and help police gather evidence if the worst should happen.”

Burglary needs to be taken seriously to protect our safety, says Jeffrey DeMarco

These figures lay bare the unfortunate reality facing victims of burglary – too many cases go unsolved.

Given that burglary remains a common crime with far-reaching consequences, this simply is not good enough.

The one place where we should feel safe is in our own home.

It can be painful to come to terms with the losses after a burglary, even more so if sentimental belongings are taken. Personal items and treasured memories are irreplaceable and that can take its toll emotionally.

But victims tell us time and time again that it is not just possessions but also their sense of safety that’s taken from them.

The thought of a stranger breaking into your home, violating your space and compromising your feelings of security, can be very distressing.

Knowing a burglar is still at large can cause extra stress and anxiety for victims, which is why it is so important in these cases that justice is served.

Sadly, some people blame themselves after a burglary, perhaps because they think they could have done more to secure doors and windows, or because they were tricked by the burglar.

However, it is vital that people know it is not their fault – and that they are never alone after a burglary. Specialist services like Victim Support can help you cope with the emotional effects and work through the next steps.

We can support you with filling out forms and dealing with insurance claims, as well as giving advice on strengthening home security. We offer this 24/7.

But there is only so much individuals and support services can do.

The police and wider justice system must work together to break the cycle of offending.

Burglary has to be taken seriously. Ensuring our homes and neighbourhoods are safe must be a priority for the police.