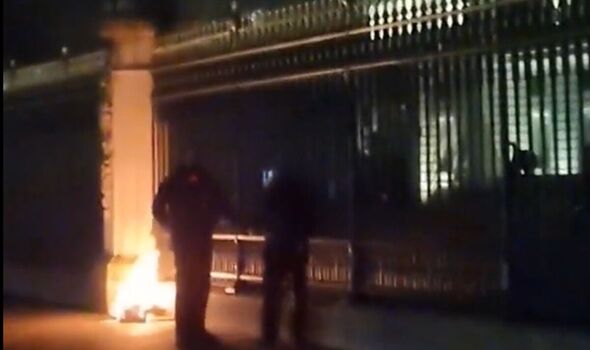 An arsonist who set fire the gate of Buckingham Palace was taken down as police rushed the man outside the central London home of King Charless III. Witnesses said police arrived “within seconds” of the blaze being lit and tackled the man to the ground. In the video police can be heard telling the man to “get on the floor, get down, stay down” as he is arrested.

A Met Police spokesman said: “Shortly after 22.08hrs on Tuesday, 20 December, a 30-year-old man was arrested on suspicion of causing criminal damage after a small fire was seen near the Buckingham Palace gates.

“The man has been taken into custody. The fire has been extinguished.”

Footage posted on social media with the caption ‘Protestors burning stuff at Buckingham Palace’, tough the reason for the small blaze remains unknown.

Thankfully no one was injured and the fire was put out.

But this is not the first time Buckingham Palace has been a target.

Just ahead of Queen Elizabeth II’s Platinum Jubile celebrations in May, a man was caught “trespassing”, telling staff “I want to see the Queen”.

Connor Attridge, 28, was handed a 24-week prison sentence, suspended for 12 months, after pleading guilty to trespassing on a protected site, possession of a bladed article and possession of a wrap of cocaine.

Earlier this year an American tourise, Joseph Huang Kang was also fined £200 for jumping over the fence into the Mews, the palace’s working stables.

Another man, Cameron Kalani, 44 was arrested after he climbed the fence of the palace with an eight-inch kitchen knife and cocaine in his bag on May 10, last year.