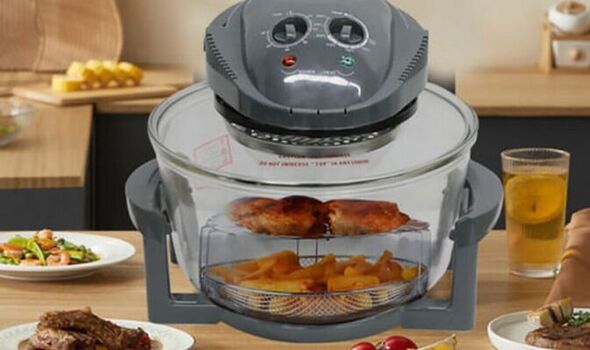 Shoppers have been snapping up an air fryer oven which can save households hundreds on their energy bills.

The Alivio Premium Halogen Air Fryer Oven was originally £149.99, but has been reduced to just £41 on Wowcher as part of an early Black Friday sale, saving shoppers a whopping £108.99.

The kitchen gadget is similar to a traditional air fryer, but uses a halogen oven to cook most foods.

A halogen oven consists of a glass bowl with a lid that contains a fan and halogen bulbs.

When switched on, beams of infrared radiation are released from the halogen bulbs to produce heat. The fan circulates hot air over and around the food to cook it. The devices cost around 75 per cent less to run than a traditional gas oven.

The energy-efficient Wowcher gadget has an adjustable temperature control dial, which heats the oven up to 250 degrees centigrade, with a built-in 60 minute timer to let you know when your food is ready.

For £41, you get the oven plus all the accessories it needs, including a high grill rack, low grill rack, baking tray, steamer tray, and tongs.

It also has a self-clean function that makes cleaning up after cooking incredibly easy.

One five-star reviewer said: ” Versatile, large enough for a roast, it does great spuds. It comes with two stands and an air fry tray. Some instructions on how to use the supplied parts would be good, a quick YouTube video showed me that there’s an extension ring too, as a novice, I didn’t know. Overall, I think it’s an economical way to replace a conventional oven.”

Another wrote: “A very affordable air fryer, well made and the digital controls are really helpful and so easy to use.”

This Wowcher deal is one of the cheapest Manchester Evening News says it has found and comes after shoppers went crazy for a similar £56 oven from Argos, saying it was the “best buy ever”.

She said: “Had a few halogen ovens in the past, This one beats them all. It’s digital, the lead can be removed from the lid, works brilliantly and saves lots of fuel as you are only heating up a small area instead of a large oven. You don’t need to spend hundreds on an air fryer, when you can buy this. Best buy ever.”

Could this Alivio Premium Halogen Air Fryer Oven give it a run for its money?