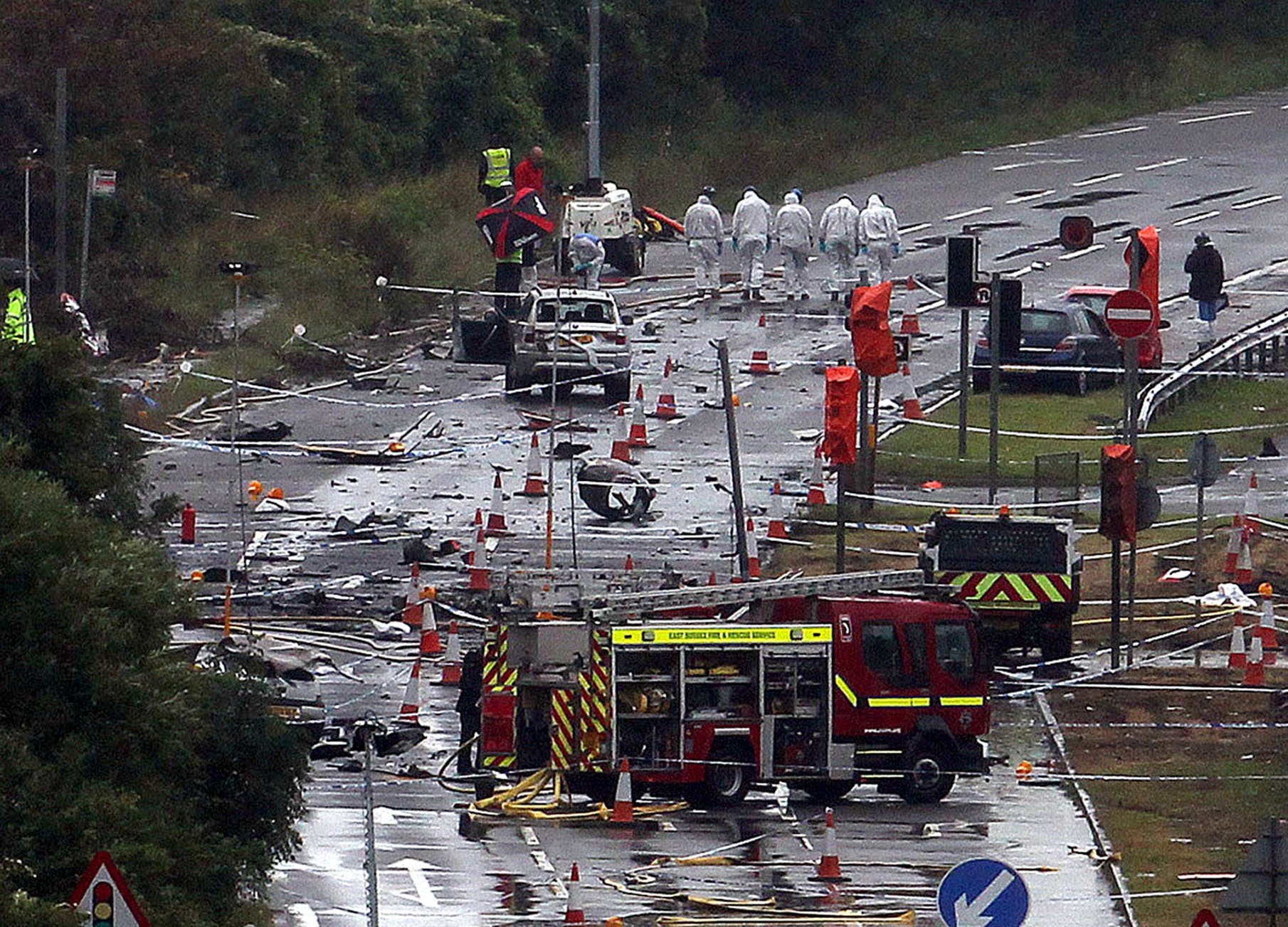 The ‘devastating’ Shoreham Airshow disaster looked ‘surreal’, with one witness thinking it was part of the show, an inquest has heard.

Eleven people were killed and 13 others injured when a Hawker Hunter aircraft crashed into the A27 during an aerial display at the air show in Sussex on August 22, 2015.

Witnesses described their horror at seeing a ‘massive fireball’ during an inquest that opened last week.

Off-duty policeman Andrew Boydell, who spent the day at the airshow with his father and a friend, said the horrific scene was like something out of a Hollywood movie.

Describing what he saw as his father drove them out, he said: ‘I could see the plane in front of me coming out of a roll heading towards the ground and it appeared to be too low.

‘I saw a large fire ball from behind the tree line about 200m away.’

Saying he was shocked, he added: ‘I could see large amount of black smoke rising into the air.

‘I could see an ambulance with people standing around looking shocked, bleeding, with clothes missing.’

PC Boydell, who identified himself as a police officer and offered to help, added: ‘I could see badly a damaged car, cars smoking, utter destruction like something out of a Hollywood film.’

Sergeant Christopher Bryant, a uniformed Sussex Police officer who was providing security at the event, said he felt ‘helpless’ following the crash.

He said: ‘I was standing about 200 metres away from the fireball and I could see fire and smoke from two locations.

‘The surreal silence I will never forget. I thought it might be part of the show until the commentator said the plane had crashed and gave his condolences to the pilot and his family.

‘We were aware there was a serious incident but nothing could have prepared us for what we saw. I believe what I saw will have a lasting effect on me and my colleagues, it was devastating and upsetting.’

Meanwhile, Joseph Jones, who worked as a steward, said he heard an ‘explosion and slam’ from about 100 metres away.

He added that he ‘thought it was part of the show’ at first.

‘I watched the crash afterwards to understand what happened. It didn’t affect me as I was far away and I didn’t see anything gory or nasty’, he said.

Bystander Neil Lewer, who was standing watching the airshow with his family, remembered ‘seeing the Hawker Hunter coming in above us when it started to pull up to begin the loop’.

‘I could hear the ear-piercingly loud scream of the jet engine. I looked to my left as a fireball and wreckage went flying past us – it was hot and there was the smell of burning in an instant.’

The pilot, Andrew Hill, was charged with 11 counts of manslaughter by gross negligence but found not guilty on all counts in March 2019. He maintains he has no memory of the crash.

Julian Firth of the Air Accidents Investigations Branch told the inquest the AAIB concluded the plane crashed because it began the manoeuvre too low to the ground.

Its entry speed and thrust were too low during a loop, it was stated.