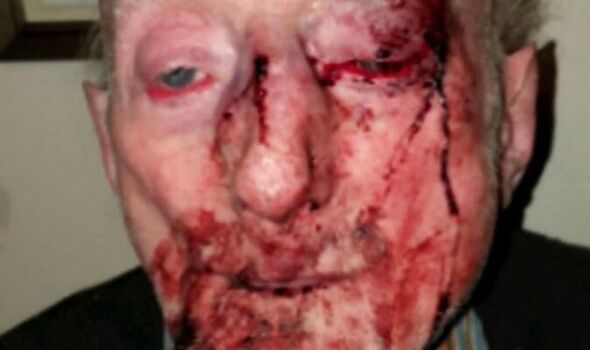 IOn March 4, a 37-year-old woman, who, according to the police, was a drug addict, broke into the man’s home in Birmingham to steal money from him. The burglar entered two other homes on Hasbury Road, Bartley Green and stole from two other pensioners and a support worker.

When she forced herself into the 87-year-old man’s home, Samantha McDonnell was confronted by him.

She then brutally attacked him, leaving him with a broken nose and a brain bleed, and then escaped with the pensioner’s bank card.

During the attack, McDonnell even unplugged the victim’s phone to stop him from calling for help.

Neighbours raised the alarm and the elderly person, who was found battered on the floor, was rushed to the hospital where he received treatment for his severe injuries.

He has since been released from the hospital, but he had to move to a new home due to not feeling safe.

Through West Midlands Police, the victim’s family released a photo of the man to show how bad the injuries inflicted by McDonnell were.

The horrific picture shows the man with two swollen eyes and blood all over his face and head.

McDonnell was found through DNA evidence left in the flat and she was arrested at her home in Bartley Green one day later.

Officers seized the stolen items and clothes she was wearing at the time of the attack.

Following her arrest, the woman appeared at Birmingham Crown Court on April 28.

She admitted theft, robbery, and burglary and was jailed for seven-and-a-half years.

A spokesperson for West Midlands Police said that her addiction likely drove McDonell to commit her crimes.

However, he noted “addiction can be no excuse for violence against a vulnerable, elderly person.

The spokesperson added: “The pensioner was left with a broken nose and a bleed on the brain.

“While he has since been released from hospital, his life has sadly been changed forever and he has had to move to a new home due to not feeling safe.

“Our thoughts remain with the man she attacked as he continues to recover from the horrible ordeal that was inflicted on him.”