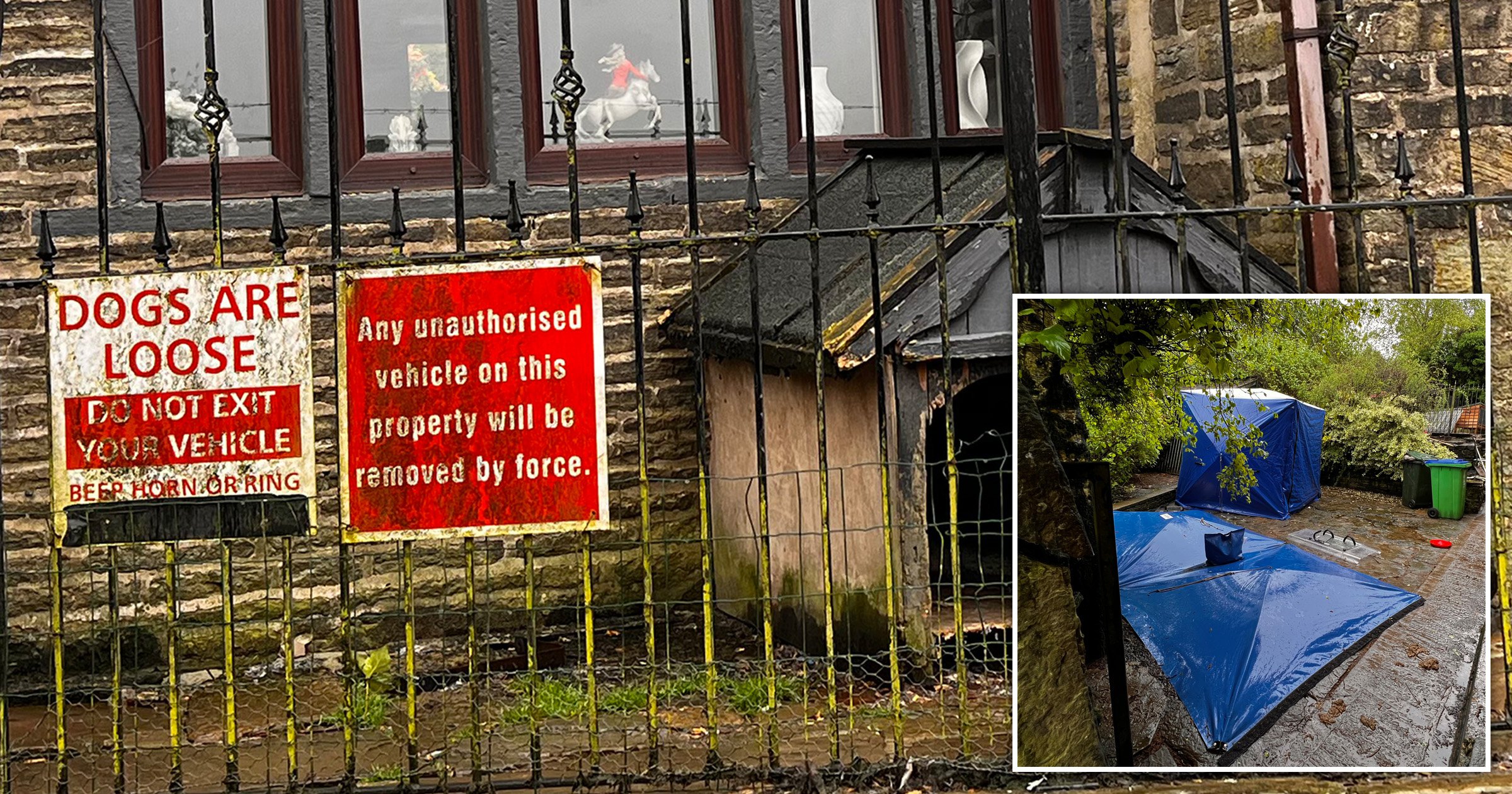 The house where a three-year-old boy was mauled to death on Sunday, had signs up warning dogs were loose.

It is understood police had previously been called to the address in Rochdale, in relation to the animals.

Several dogs have been seized following the devastating incident in Milnrow, with one humanly destroyed.

Now, photos from the scene reveal the rural house had a chilling red and white sign on display warning people not to exit their vehicle because ‘dogs are loose’.

Behind the fence where the sign hangs appears to be a heavily chewed and poorly maintained kennel.

Emergency services rushed to the property on Carr Lane shortly after 1pm yesterday, where they found a toddler seriously injured.

The boy was taken to hospital by ambulance but was later pronounced dead.

Following the devastating incident, police have launched a criminal investigation and the rural property close to the M62 has been cordoned off.

Several forensic tents have been erected in the garden and police have been seen combing the property for evidence.

Greater Manchester police has said initial enquiries suggest the boy was outside with a number of dogs prior to being found with serious injuries.

The force said enquiries in relation to the dogs are ongoing. No arrests have been made at this stage.

‘A thorough investigation is ongoing to establish the full circumstances surrounding this incident and review other incidents of note,’ he said.

‘Due to previous contact, GMP’s Professional Standards Branch is making a referral to the Independent Office for Police Conduct.

‘It goes without saying that this news will have had an impact on the community.

‘I can reassure members of the public that any criminal offences identified by our enquiries in relation to this incident will be dealt with accordingly by ourselves and our criminal justice partners.

‘We are aware of speculation on social media and ask that members of the public and the media refrain from engaging in speculation at this time until our investigation is complete and any subsequent criminal proceedings have concluded.’

Sunday’s tragedy is the latest in a series of fatal dog attacks on children.

Animal welfare experts last month warned the rise in dog attacks may be linked to a surge in people buying pets during lockdown.

Dr Sam Gaines, from the RSPCA, told The Sun the charity was concerned people taking on animals they did not have the time or knowledge to care for could be fuelling the rise in incidents.

‘We’ve seen an increase in dog ownership because of the pandemic,’ she said.

‘The RSPCA are really concerned about this. People found themselves in a situation where they wanted some companionship, wanted something for their children to look after.

‘Whether that led to some impulse purchases, or impulse acquisitions for people without asking: “Do I have the time, do I have the resources and finances to make what is a very long-term commitment?”

‘We are worried that some of the incidents could be related to that.

‘Some of the increases in dog bites we’ve seen – they may well be as a result of that.’

Anyone with information on the incident has been asked to contact GMP via 0161 856 7386 or gmp.police.uk.

Information can also be shared anonymously via Crimestoppers on 0800 555 111.