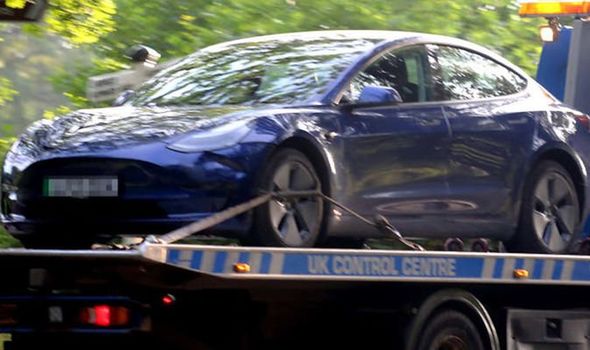 He was airlifted to hospital while the other five youngsters and the adult were taken for treatment by road following the arrival of a fleet of ambulances. The horror accident at the £36,000-a-year Ardingly College in West Sussex happened at a holiday camp pick-up in the North Quad within the school grounds.

Headteacher Ben Figgis said: “This was a serious incident that caused considerable shock to the children, parents and staff involved.

“We are keeping in mind particularly the children who were injured and their families.” The driver of the electric Tesla, a 47-year-old woman, was not hurt in Monday’s accident.

The eight-year-old boy was flown by helicopter to St George’s Hospital in south London, where he was continuing to receive treatment.

Investigating police said his injuries were serious but not life-threatening. The Tesla was later taken away from the scene near Haywards Heath on the back of a recovery truck.

Supt James Collis appealed for witnesses to come forward, including those with mobile footage.

He said: “The cause of the collision will form part of our investigation, and we ask people not to speculate at this time.”

The incident came on the very same day an investigation was launched in the US into whether Tesla cars ‑ owned by billionaire Elon Musk ‑ are safe.

US regulators have opened a formal safety probe into Tesla Inc’s driver assistance system Autopilot after a series of crashes.

Ardingly College old boys include Have I Got News For You panellist Ian Hislop and film cad Terry Thomas.