How is the High Street doing after a turbulent period led many to shut down?

Abergavenny in Monmouthshire is where urban valleys and rural communities meet.

Living standards here are typical of Wales as a whole, in terms of incomes, jobs, benefits and housing.

What better place to start to look at this market town than the market?

Cattle and sheep were sold here until a few years ago but now it has largely bargains on show: cheap meat, cheap clothes and even a pawn broker.

For 40 years, June Phillips has been growing plants with her brother Steve and selling them at the market.

They have loyal customers, she says, made up of country people who come into town and valleys people from as far as Merthyr Tydfil.

When Covid-19 closed the market they delivered to about 100 of their customers. The market has been open again for a month but she says shoppers aren’t spending like they did before lockdown.

“They are buying but it’s a lot quieter and people are still very nervous about coming out,” she said.

“We are still delivering to about 50 people who are not confident that it is all over so it’s going to take a long time to get back to normal.”

Household finances in Wales have been particularly hit, while Office for National Statistics (ONS) figures out last week showed that, despite shops, pubs and restaurants re-opening, the proportion of people who were actually working at the end of July was lower than before lockdown. 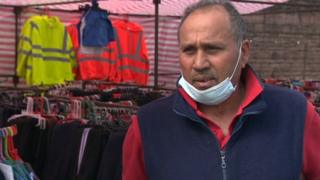 Surjit Singh has been running a stall for five years but Covid-19 left it shut for five months.

“We’ve been going again for three weeks but it’s quiet – people are scared to come out to the market. At the end of this year, I’ll finish, it’s hard work for little money.”

What do we know about Abergavenny?

On to the town centre and what is the feeling there?

With weddings and big events cancelled with lockdown, there was no-one buying hats nor could they. Alison Tod has been making hats since she was a teenager. She shut up shop and dipped into her savings and had a grant to help towards her rent.

Alison believes money will be tight but believes there will still be a market.

“It’s a luxury item for many people but in the context of a wedding, we’ll always serve the principal guests but perhaps friends might go for something less expensive or not wear a hat?

“People will find a way to celebrate and want to dress up. We’ll see what happens. We have to make sure we have the offer and the product to make it accessible for everybody.”

‘We’d help anyone we could’

Sophie Kumar, of Angel Bakery, starting using her van for a delivery service, selling bread and flour, but also helping out her own suppliers. She delivered salad, fruit and vegetables from a farmer who normally supplied restaurants, and got a brewery involved.

“We were lucky we were allowed to stay open,” she said.

“We knew there was demand for food, it’s not a luxury provision – and with our suppliers, you build up relationships, they’re friends. We’d help anyone we could to get their products to the market place.”

She said it had been a positive experience with customers too. They’ve now taken back almost all their staff.

During lockdown, deep-fried mozzarella sticks and cheese made by Abergavenny Fine Foods were in demand. The firm has a site in the middle of town and another over the hill in Blaenavon.

They were selling so much that only a handful of the 200 workforce were furloughed.

‘For us the future is really bright’

“We budgeted for a slight slowdown in business but saw the exact opposite – double-digit growth since the start of lockdown. More people are enjoying the big night in – snack food they like at home, in addition we saw growth in our vegetarian and vegan lines.

“That means all our retailers are demanding more than we can cope with so we’re actually increasing staff and capacity, forecasting another 20% uplift next year. For us the future is really bright.”

But that confidence is not shared widely. A recent ONS survey found fewer businesses expected sales to pick up, while the accommodation and food industry consistently expected business to be better than it turned out to be.

Igino Spuntarelli, owner of Pizzorante and a nearby tapas bar, said it had been a worrying time but his landlord had helped over the rent and they had some savings. His 12 staff had been furloughed but are back.

The “eat out to help out” scheme also helped a lot, as the lockdown eased and should keep them going for a few months, but they are still not open at lunchtimes.

He is uncertain about the future.

“It’s a chain. If someone fails, everybody will be in trouble.”

And that’s the fear. What will happen when the furlough scheme ends? Will we see mass lay-offs or small groups made redundant by lots of small employers?

In the end, are we spending enough to get our high streets through this and make up for months of lockdown . No-one can know the answer – yet.