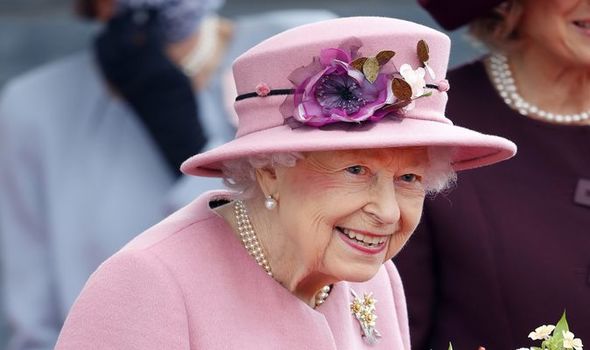 The monarch was visiting the Welsh Parliament with the Prince of Wales and the Duchess of Cornwall, and made her way down the red carpet with a walking stick for the second time. But while there had been murmurs of surprised concern when the Queen was seen using it for the first time at Westminster Abbey a few days ago, she looked not only relaxed but wonderfully happy, a testament to the strength, resilience and leadership she is still demonstrating at the age of 95.

Seeing her out and about since she returned from her Balmoral break, it is easy to forget that 2021 has been a truly punishing year for the Queen. Having spent lockdowns in a lonely “bubble”, just as she looked forward to the gradual lifting of restrictions she lost her beloved husband of 73 years.

There was the vexatious matter of Prince Andrew’s legal troubles, which reportedly led his siblings to demand that he be permanently sidelined from royal duties, and the continuing pressures of dealing with long-distance sniping from the Duke and Duchess of Sussex.

It is easy to forget the Queen’s woes quite simply because she makes the job look effortless. But commentators who predicted that without her “strength and stay” – as she described Philip on their 50th wedding anniversary – she would crumble, scale back her workload or retreat into a period of prolonged mourning, were proved sorely mistaken.

Not only is she gleefully returning to her role, she seems determined to let the world know that Britain is back in business after the pandemic… and so is she.

OF COURSE, as befits a woman who believes protocol and tradition are the bedrock of the British monarchy, the Queen observed a two-week period of mourning after Philip died in April, two months shy of his 100th birthday, at Windsor Castle where the couple isolated.

But royal writer Robert Jobson says the monarch is sending a powerful message to the nation that she is back at work. “The Queen wants to be seen to be out and about in bright clothes and with a radiant smile. She is aware of the need to raise spirits in the country after the lockdown, which she herself found very hard,” he says. “If he were still alive, the Duke of Edinburgh would be putting his best foot forward and that is what she is doing too.”

Her first public appearance in April after two weeks of mourning was a virtual audience to greet two new ambassadors, from Latvia and the Ivory Coast, and if she was feeling anything less than perky, it was impossible to tell from her broad welcoming smile.

And a month later she was on duty in person for the State Opening of Parliament. It was a scaled-back affair due to the pandemic, with no gilded carriages or ceremonial robes. But in her smart elegant grey and yellow outfit, she looked stately and determined as she did her duty, one she had performed for so many years with Prince Philip by her side. In July she appeared to be having a wonderful time at the Royal Windsor Horse Show.

Earlier this month she opened the Scottish Parliament at Holyrood, and despite the tensions bubbling under the surface in a country deeply divided over the thorny issue of independence, she was charm personified, with smiles for everyone.

Then it was back to work at Buckingham Palace, where she joined the Earl of Wessex in launching The Queen’s Baton Relay for the 2022 Commonwealth Games. In her orange coat and hat she looked a very different woman to the figure of grief who sat all alone in the Windsor Castle chapel to say goodbye to her beloved Philip.

Shortly before Philip died, she appeared with Prince Charles in the grounds of Windsor Castle. Her gaunt face was etched with the pain of watching her husband’s life slowly but unmistakably ebb away.

As ever she wanted no preferential treatment. When it came to funeral arrangements the Royal Family would scrap their plans for a state funeral and follow the same rules as all ordinary Britons who had lost loved ones during the pandemic.

Thus it was that at the moment in her life when she needed a hand to hold, the warmth of a family member at her side, the Queen found herself entirely alone, staring at Philip’s coffin in front of her, separated by several feet from the rest of her family who could only gaze across the aisle at her in solemn solitary silence. As was right and proper, the Queen, having bravely allowed the cameras to share the Royal Family’s grief at Philip’s death, withdrew. We learned from the Countess of Wessex that the Queen, although stoic, was profoundly sad.

But as ever, she was counting her blessings. The Queen described Philip’s passing peacefully at home with her rather than in hospital under Covid regulations as “a miracle”.

And Robert Jobson says Her Majesty, even in times of loss and sadness, is always thinking of others less fortunate.

“It is a relief for any spouse when the suffering of a loved one ends,” says Robert. “But they had a very long, happy marriage with many years tbte together, something she is aware has been denied many couples throughout the pandemic and for which she feels eternally grateful.”

The Queen has faced a series of daunting milestones over the summer, such as returning to beloved family homes that hold dear memories of time spent with her husband.

Over the summer the Queen stayed at Balmoral Castle, her first holiday at her official Scottish residence alone. As an indication of her intention to carry on as normal, the Queen invited friends and family to stay including the Duke and Duchess of Cambridge and their three children, George, Charlotte and Louis.

Next year the Queen celebrates her Platinum Jubilee but first there is the autumn and winter to get through – and there is work to do.

Royal author Christopher Wilson says that a damaging and upsetting series of attacks by the Duke and Duchess of Sussex has made the Royal Family more determined than ever to show they can be a force for good.

“This period is one of intense activity for the Royal Family,” he says. “We’re seeing more of the royals, virtually and in reality, than we’ve ever seen at this time of year in the past few years and the Queen is at the forefront. This is in reaction to the negative stories emanating, mainly from California, but also the nagging toothache of Prince Andrew,” he says.

“I think the Queen takes very personally the standing which her family is held in by the nation and the world, and she’s putting herself out there to help counteract the negative vibes. She’s in astonishing health for a woman of 95, and I think she draws her strength from the love of the nation she’s served for all these years.”