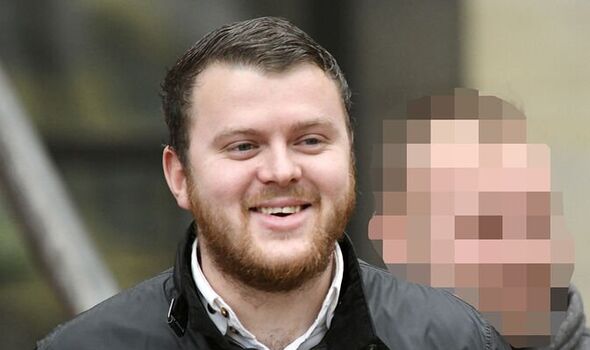 Blake McCloud, 28, deliberately drove onto a footpath to use his van as a “weapon” in a menacing bid to frighten the woman after spotting her with his ex. The new girlfriend suffered a broken finger and a sprained ankle after she took the “brunt of the blow” in the “horrific” collision.

A court heard McCloud stopped at the scene only momentarily but police traced his van just before midnight. He later handed himself in at a police station.

But he was seen laughing and joking outside Hull Crown Court before he admitted dangerous driving and causing serious injury to the woman.

He was jailed for 16 months and was banned from driving for 32 months. He must pass an extended retest and was given an indefinite restraining order.

McCloud, a gas fitter, shamelessly tried to question the sentence, saying: “Loads of people are going to lose their jobs because of this sentence.

“It’s not me that I am on about, it’s the people that are working for me.”

The judge added: “The incident was, unsurprisingly, extremely frightening.

“Your actions were conducted in anger, the context being the ending of your relationship with your ex-partner.

“You were using a van effectively as a weapon. The vehicle was used as a weapon to at least scare or intimidate.”

The court heard McCloud spotted the two women leaving a house party together at around 11pm on August 28 near Sutton-on-Hull, east Hull.

Jeremy Evans, prosecuting, said the new girlfriend of McCloud’s ex became “tipsy but not drunk” after downing cocktails and bottles of lager.

She “cockled over her ankle” and fell but was not hurt.

When McCloud’s ex saw the man’s work van, she tried to hide but the other woman encouraged her to carry on walking.

The self-employed gas fitter suddenly braked, reversed the van into a driveway and did a U-turn towards the direction of the woman. The new girlfriend was hit by the van at low speed after both front tyres went onto the pavement.

The victim could not work for four weeks afterwards, had pain walking up and down stairs and needed antibiotics.

Mr Evans added: “She remains fearful of the defendant’s unpredictable behaviour towards her.”

The judge heard McCloud, who since had a new girlfriend, acted wholly out of character.

McCloud’s ex-girlfriend, who had bought a house with him, left their home for a new life with the woman last year.

The court heard McCloud had convictions for two previous offences, including being given a one-year suspended prison sentence for wounding, involving punching a 15-year-old boy on the jaw.

“At no point does he underestimate his actions,” said Mr Savage.

“He has reflected and continued to reflect on his behaviour that night, something he has not taken lightly.

“He realises that, without his actions, she would not have been hurt.

“He can’t express to this court why he acted the way he did.

“He would concede that it was an affair of the heart that went very wrong but he has moved on.

“He is attempting to resolve the finances with his former partner to remortgage or sell his house. What he can’t do is take back his actions.

“It was a low-speed incident but it was, of course, horrific. It fills him with horror that the injuries could have been much worse.

“There was no aggression in his driving. It wasn’t a prolonged incident.”