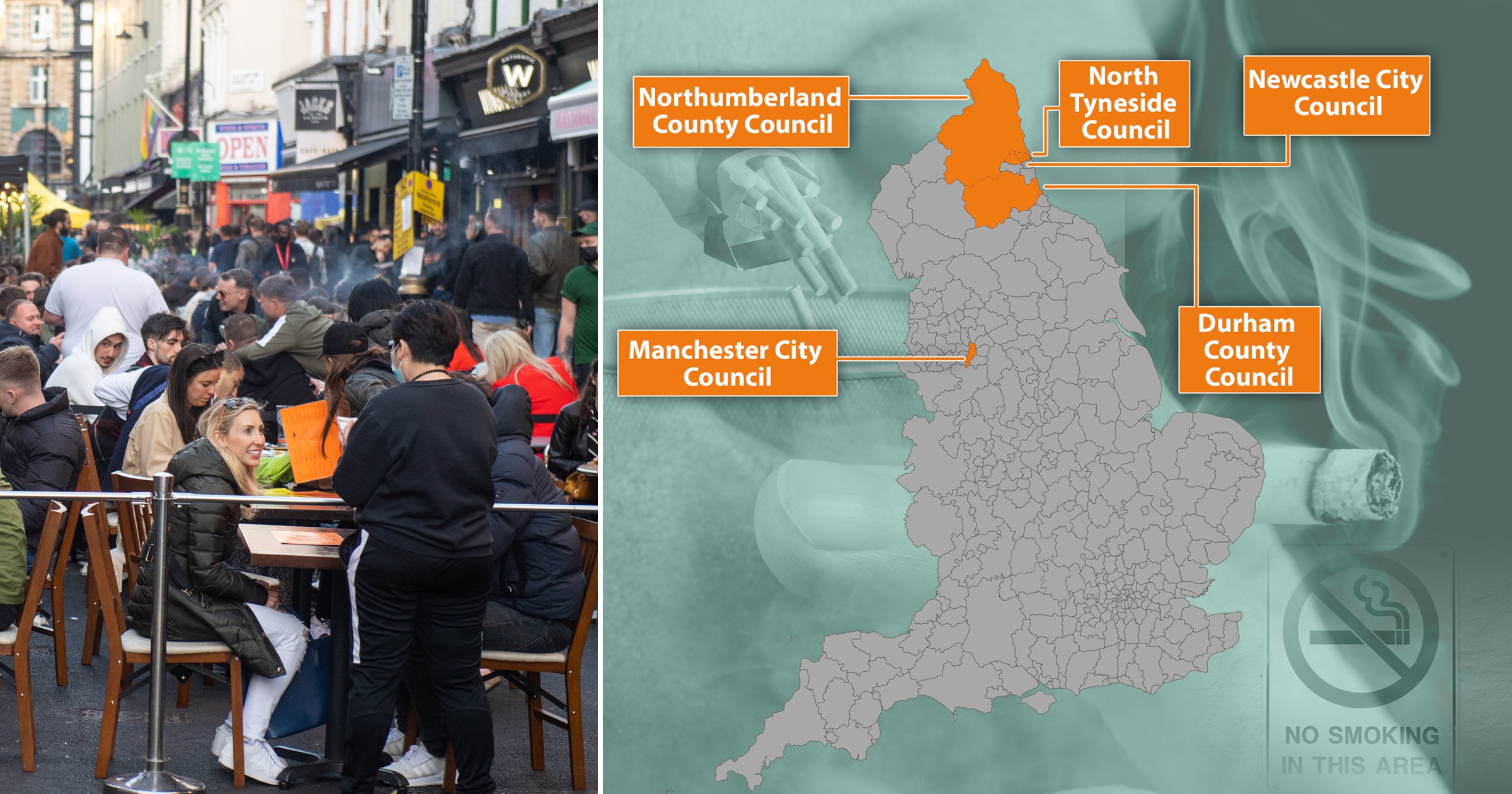 Five local authorities in England have banned smoking outside cafes, pubs and restaurants, and others are considering doing the same.

These councils have started including the rules in their licensing agreements whenever hospitality venues apply to place tables and chairs outside.

Oxfordshire County Council is considering following suit, having announced its aim to go completely smoke-free by 2025. The move would see smoking banned not only near hospitality venues, but also outside workplaces.

A seventh local authority, Gateshead Council, does not have an official policy on outdoor smoking, but all of its licenses for pubs and restaurants and cafes now state that people must not smoke on the pavement.

The Government is pushing for the whole of England to achieve smoke-free status by 2030, meaning 5% or less of the population are smokers.

Attention has been drawn to smoking outside pubs as the Covid pandemic prompted a shift towards ‘al fresco’ drinking and dining.

There was a failed attempt to push an amendment through the House of Lords last year to ban smoking on pavements outside pubs.

Instead the Government compromised, announcing that venues must provide separate outdoor seating for smokers and non-smokers with clear signage.

But with a growing push to ban smoking outside venues completely, smokers’ rights lobby groups are hitting back.

Simon Clark, director of Forest (Freedom Organisation for the Right to Enjoy Smoking Tobacco), said: ‘It’s no business of local councils if adults choose to smoke, and if they smoke outside during working hours that’s a matter for them and their employer not the council.

‘Nor should it be the role of councillors to force smokers to quit by extending the indoor smoking ban to any outdoor area where there is no risk to non-smokers’.

‘The public will want local authorities to help local businesses bounce back from the impact of the pandemic. They will also be expected to focus on issues like employment and housing.

‘Reducing smoking rates to meet some idealistic target is not a priority for most people and council policy should reflect that.’

Director of campaign group We Vape, Mark Oates, said: ‘It now seems fashionable again to attack smokers instead of helping them, which is all these five councils are doing.

‘They don’t care about the individual smoker’s health, they care about looking good. Smokers need to be educated in the alternatives, not treated like exiles.’

But Deborah Arnott, chief executive of Ash (Action on Smoking and Health), said most customers supported the idea of a pavement ban.

She told the Guardian: ‘Our surveys show that two-thirds of the public want areas outside pubs and cafes to be smoke-free.

‘It is not like this is not on anyone’s radar. People complain a lot that if they go outside, they have to sit among smokers.’

He added: ‘One in five people who die from cancer will die from [lung cancer]. The reason that people like me get very concerned and very upset about it is that this cancer is almost entirely caused for profit.’