Electric car owners have been poking fun at petrol and diesel drivers caught up in the fuel crisis by flooding the internet with memes at their expense.

Lengthy queues have snaked their way out of forecourts across the country over the past four days as motorists scrambled to fill up amid fears pumps would run dry.

While there is ‘plenty of fuel’ in the country, there have been problems getting it to filling stations due to a shortage of HGV drivers.

The drop in deliveries combined with drivers ignoring warnings not to panic buy has led to hundreds of stations either having to ration fuel or close altogether.

Some motorists have resorted to ‘ludicrous’ measures in an attempt to ensure they don’t run out, while tempers have flared on some forecourts as frustrations at the long queues boil over.

And electric car owners have been revelling in petrol and diesel owners’ misery, posting pictures mocking those affected by the crisis.

They have been sharing memes of actors Tom Cruise and Leonardo DiCaprio in hysterics with captions like ‘electric car owners right now’.

The BBC even got in on the fun by sending aptly named reported Phil McCann down to a petrol station to cover drivers’ plight. 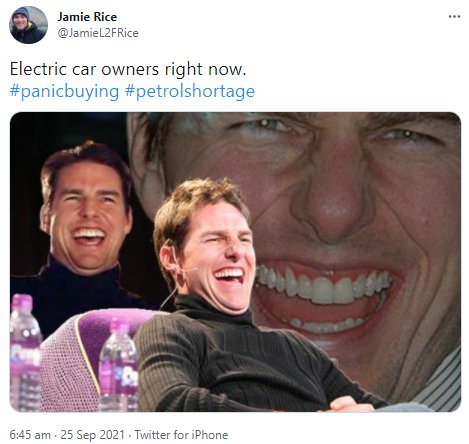 Ministers appealed to motorists to stop ‘panic buying’ again on Monday, as the fuel industry moved to reassure people that demand for fuel should return to normal levels in ‘the coming days’.

In a joint statement, leading suppliers, including BP, Esso and Shell, said that with many cars now carrying more petrol than usual, pressure on filling stations should start to ease.

Earlier Boris Johnson drew back from implementing plans to send in troops to deliver fuel to the forecourts as Downing Street insisted there were ‘ample’ supplies.