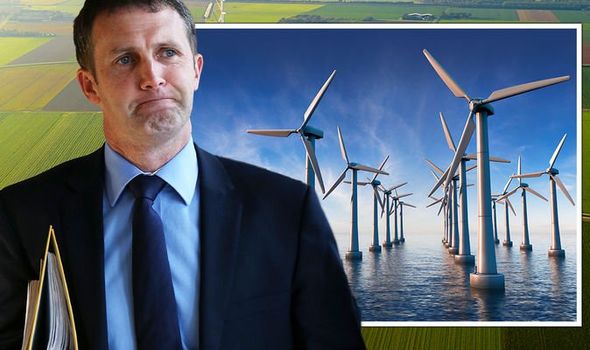 According to Renewable UK, figures from before Brexit show the proportion of EU workers in the UK’s offshore wind industry having accounting for less than five percent. An energy industry source said that, if anything, there would be an even lower proportion of people from the EU working in on UK solar and onshore wind projects.

Michael Matheson, Scotland’s Net Zero Secretary, told a meeting of the British and Irish Council at the COP26 climate summit that the renewable energy sector had expressed concern to him about the impact of leaving the EU.

He said they were worried about the strain Brexit was putting on access to the labour market.

He told the gathering: “An issue across the whole of the UK and Ireland that we need to understand is that Brexit is having an impact that could start to compromise our ability to move at the pace we need to in order to tackle climate change.

“I’ve heard over and over again here at this summit about the need for pace and that this is a decisive decade; we heard it from the World Leaders Summit last week as well.

“Key to that is not just the deployment of technology, it’s also having the skills to manufacture, install and maintain that technology.

“We need to start to recognise that limited access to the right labour markets could compromise our ability to move at the pace at which we need to tackle climate change.”

However, a Renewable UK spokesperson told the Express that EU workers only made up 4.86 percent of those in the UK offshore wind industry – “so not a significant proportion.”

They added: “We don’t know whether Brexit has had any effect to be honest, as the stats were compiled in March 2020”.

An energy industry source said that though there were no hard figures, there would likely be an even lower proportion of EU workers in other renewable energy sectors, as this would make more sense economically.

As solar and onshore wind projects were not on as enormous a scale as offshore wind farms, it makes sense to get a very local workforce to build the projects to keep costs down, they said.

Renewable UK said it was currently working with the Government to increase the number of jobs in the renewable energy sector.

Boris Johnson wants to see the UK’s offshore wind capacity quadrupled by 2030 – from just over 10 gigawatts now to 40.

At present, projects in the pipeline would give the UK an offshore wind capacity of 63 gigawatts. The spokesperson said the UK would be able to hit the Prime Minister’s target “as long as new projects continue to get consented in a timely way.”

In March this year, research by the Offshore Wind Industry Council (OWIC) showed that the number of people working in the “world-leading” offshore wind industry is set to rise significantly by 2026.

The report said that the current workforce of 26,000 would skyrocket to 69,800 in just five years.

Most of the jobs would be created in areas in urgent need of levelling up, such as the north-east, Yorkshire, East Anglia and Scotland.

The private sector will invest £60.8billion in wind projects across the UK in the next five years, OWIC predicted.

Melanie Onn, Renewable UK deputy chief executive, said at the time: “Renewables are creating opportunities for people across the UK, from school-leavers and graduates to workers leaving fossil fuel industries, and we want to ensure the right training and support is in place to harness all the talent and expertise we’ll need in the transition to clean energy.”

In the 2014 referendum, the SNP’s economic case for independence relied heavily on the North Sea oil fields.

In a speech in 2017 to the Oil and Gas UK conference, SNP leader Nicola Sturgeon noted that the oil fields may contain as many as 20billion barrels of oil.

According to Politico, she told the conference: “Our primary aim – and I want to underline and emphasis this – our primary aim is to maximise economic recovery of those reserves.”

She added: “the Scottish Government will continue to support the oil and gas sector as strongly as we possibly can.”