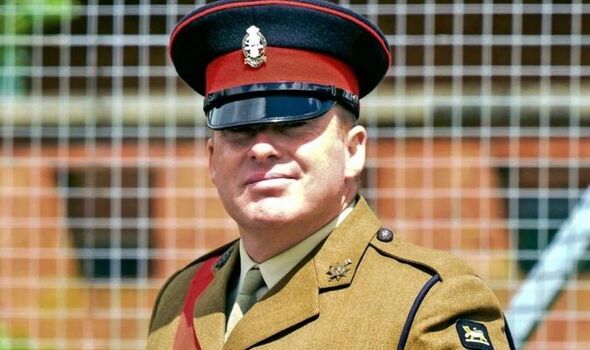 The Regimental Sergeant Major was demoted after he failed to maintain the standards at the annual German-inspired beer festival.

The Army attended the event last October at the Infantry Battle School in Breton, Wales.

Regimental Sergeant Major Michael Ransley was “responsible for setting and maintaining standards” at the event on October 16.

He had the role of the Battle School’s alcohol policy adviser and his presence at the event was supposed to act as a deterrent to the other soldiers against excessive drinking.

However, the RSM left guests at the event shocked by the “smell and sight” of Mr Ransley.

The 40-year-old was said to be passed out with “a strong smell of vomit and faeces”.

He reportedly was seen with “faeces on his leg” and refused to leave the event before passing out.

The events caused the soldier to suffer a “spectacular fall from grace” when he was demoted following the incident.

Mr Ransley had previously served in Iraq, Northern Ireland and the Balkans and was described in court as the “epitome” of a commander.

The soldier of 24 years is understood to have had an accident which left the Bavarian socks he was wearing covered in his own waste.

At the Oktoberfest event, which was attended by both civilians and military personnel, Mr Ransley wore brown lederhosen.

He had a meeting with senior soldiers prior to the event over fears around excessive drinking.

DON’T MISS:
Drivers who warn others about speed cameras could get £1,000 fine [INSIGHT]
Drivers could face jail and fines for giving tips on Facebook [ANALYSIS]
Huge driving law changes coming this month – target for fines [COMMENT]

The dad of three, and the most senior soldier at the festival, is said to have repeatedly ignored advice to clean himself up during the day.

The details of the incident came to light at Bulford Military Court in Wiltshire.

The sergeant attempted to overturn the demotion but the judge dismissed his appeal, saying that he should have been setting standards.