The sonic boom is thought to have been caused by an aircraft flying overhead.  A PhD student at Cambridge University Guy Aglionby reported the sonic boom in Cambridge came from a Euro fighter jet with a speed of at least 995 knots. Meanwhile, locals from across London, Essex and Cambridge shared their shock at hearing the “explosion” like sound as houses shook from the sound.

Graham tweeted: “I live in Cambridge. Wow. My house just rocked with a sonic boom from a fighter jet. Did anyone else hear it?”

One resident, 31, of Billericay, Essex heard the noise and said: “The house shook and my ears are still hurting now. It was like an explosion had gone off.”

She added: “I knew it must have been a sonic boom because I looked out of the window into the distance and saw loads of birds flying around for miles.” 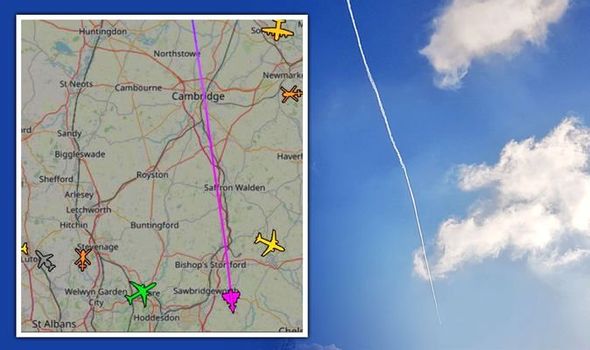 Another Essex local, 46, said: “It made me jump. I thought at first it was a large bird flying headfirst into the front window.

“It made the house shake, I’ve never heard of a sonic boom before but it was really loud.”

A sonic boom occurs when an object travels faster than the speed of sound and breaks the sound barrier.

They are often caused by aircraft. Jets move the air in front of them causing a cone of pressurised air molecules. The bigger the jet, the more air is moved.

When the pressure is released quickly a sonic boom is heard.