The Queen was chatting to cancer patient Pat White, whose husband’s phone rang as they were being introduced. The monarch saw the funny side to the incident and was seen cracking up. Graham White moved quickly to reach into his pocket and turn off his phone, later saying it was “a bit embarrassing”. 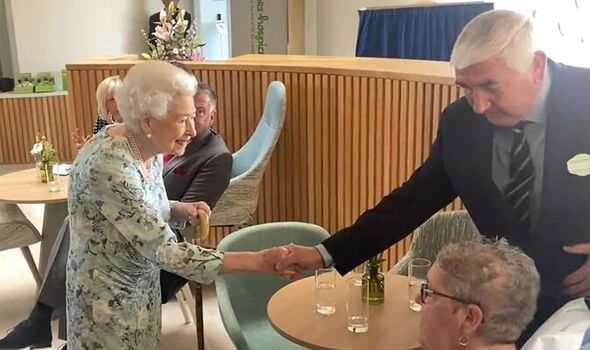 According to the Express & Star, the Queen quipped: “Typical, a phone goes off immediately.”

While Mr White was turning off his phone, the Queen continued to chat with Pat, who has stage 4 cancer and is receiving respite care at the centre in Maidenhead.

The Queen made the rare public appearance outside Windsor Castle to formally open the new £22m Thames Hospice building in nearby Maidenhead.

The 96-year-old monarch was joined by her daughter, the Princess Royal.

JUST IN: Royal Family: Meghan given nickname by California neighbours