The surge of cases is causing chaos as people scramble to obtain tests, businesses grapple with staff shortages and New Year’s festivities are thrown into question. 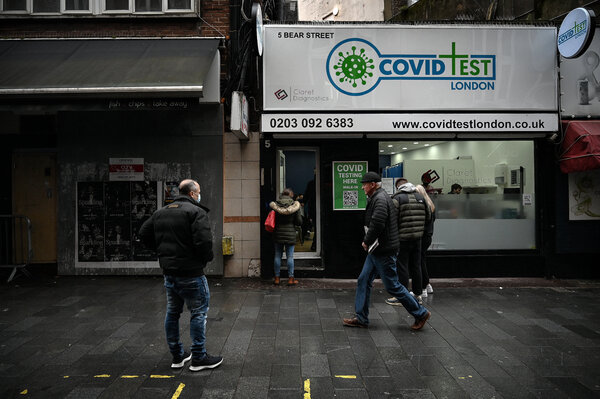 LONDON — Across Europe, records for new coronavirus infections are being set day after day, as the Omicron variant tears through populations with a swiftness outpacing anything witnessed over the past two years of the pandemic.

Like the United States, which recorded a new high in daily cases on Tuesday, European nations are struggling against an onslaught of infections from a virus that shows no sign of going away. Driven, health officials suspect, by the Omicron variant, Britain, Denmark, France, Greece, Italy and Spain all set records for new daily case counts this week.

There are early indications that the variant might be milder than previous versions of the virus — with vaccinations, boosters and previous infections all offering some protection against serious illness and death. But the surge of infections is causing chaos, as people scramble to obtain tests, businesses grapple with staff shortages and New Year’s festivities are thrown into question.

The World Health Organization warned on Wednesday that the circulation of the Delta variant and the rapid spread of Omicron could overwhelm health care systems, even as early data showed that vaccines continue to offer some protection to vaccinated people from severe illness and death from both variants.

“Delta and Omicron are now twin threats driving up cases to record numbers, leading to spikes in hospitalization and deaths,” Dr. Tedros Adhanom Ghebreyesus, the W.H.O.’s director general, said at a news conference in Geneva. “I am highly concerned that Omicron, being highly transmissible and spreading at the same time as Delta, is leading to a tsunami of cases.”

In England and Northern Ireland on Wednesday, there were no P.C.R. test appointments available to book online, and around midday, many people reported that none were available to order online through the British government’s health services.

Leyla Hannbeck, the chief executive of the Association of Independent Multiple Pharmacies, a British organization representing community pharmacies, said the uptick in cases and a recent shift on government guidelines around testing has led to a surge in demand for rapid lateral-flow tests.

“We have people coming in every two to five minutes asking for lateral-flow testing,” she said. “And we don’t know when it’s going to arrive back in stock, and it’s completely out of our control.”

In Spain — which is reporting roughly 100,000 daily infections for the first time in the pandemic — contact-tracing efforts are being overwhelmed and people are lining up outside hospitals urgently seeking tests so they can be approved for medical leave. Although Spain is not seeing a sharp rise in people needing intensive care, Mario Fontán of the Spanish Epidemiology Society said that concerns over infection were rising.

“A sensation of greater chaos has been created compared to the severity that the clinical picture requires,” he told the Spanish news media.

Portugal had one of the most successful vaccination campaigns in the world, reaching nearly every person eligible and driving down the toll wrought by the Delta variant. But infections are climbing again, with the health minister, Marta Temido, warning that the number of infections could double every eight days, given the current trend of Omicron cases.

Even in the Netherlands, which nearly two weeks ago reimposed a nationwide lockdown, Omicron is spreading, causing more than 50 percent of infections in the past week, replacing Delta as the dominant variant, according to the National Institute for Public Health and the Environment.

“The faster spread of this Omicron variant will lead to additional infections in the near future, which will also increase the number of hospital admissions,” the institute said on Tuesday.

On Wednesday, the Dutch foreign ministry said all travelers from the United States — which is also setting daily records of infection — will have to quarantine for five days and have a negative coronavirus test to enter the country.

Since data on hospitalizations lags behind reports of infection, scientists caution that it is too soon to gauge the Omicron wave’s effect on health care systems.

At the moment, none of the nations in Europe setting records for infections are reporting precipitous rises in hospitalizations, although the surge is only a few weeks old.

The W.H.O. warned on Wednesday that it was not just patients that were stressing the system, but health care workers falling ill and needing to isolate.

Because Omicron appears to have been spreading in Britain a few weeks ahead of most nations, health experts are looking there for signs of the variant’s severity. England recorded 117,093 cases on Tuesday, a new high, but the number of people needing intensive care remains below January’s peak.

On Wednesday, Prime Minister Boris Johnson cited this preliminary data to justify his decision not to step up restrictions.

“We’re looking at the data, and what we’re seeing is that we’ve got cases certainly going up — we’ve got a lot of cases of Omicron,” he said, “but on the other hand, we can see the data about the relative mildness of Omicron.”

But experts cautioned that a fuller picture will be available only in early January.

Even if the percentage of people who need hospital care is significantly lower than in past waves, the sheer number of people being infected could still cause intense pressure on health care systems.

At the moment, the Omicron variant is spreading faster than scientists can provide answers. That has meant a holiday season of uncertainty, anxiety and shifting restrictions.

The U.S. surge The U.S. record for daily coronavirus cases has been broken, as two highly contagious variants — Delta and Omicron — have spread across the country. The seven-day average of U.S. cases topped 267,000 on Tuesday, according to a New York Times database.

New C.D.C. guidelines Hoping to prevent further disruptions to daily life, the C.D.C. reduced the period that certain infected Americans must sequester to five days from 10. This change applies only to those without symptoms, or those without fevers whose other symptoms are improving.

Staying safe Worried about spreading Covid? Keep yourself and others safe by following some basic guidance on when to test and how to use at-home virus tests (if you can find them). Here is what to do if you test positive for the coronavirus.

Around the world Britain, Denmark, France, Greece and Italy all set records for new daily cases this week. In each country, health officials suspect that Omicron is driving the infections. Globally, thousands of flights were canceled as the Omicron variant began to affect airline crews.

And for many countries, the wave is only starting to rise.

In France, which set a record of 208,000 new daily cases on Wednesday, the most recorded in any European country since the pandemic began, the health minister, Olivier Véran, said the increase was “dizzying.”

“This means that 24 hours a day, day and night, every second in our country, two French people are diagnosed positive,” he said, according to Reuters.

Even though Germany reported a doubling of Omicron cases over the past week, the country’s health minister, Karl Lauterbach, said on Wednesday that the true number of new coronavirus cases has been underreported. He said that fewer people are testing over the holidays and the actual incidence rate of infections is about two or three times higher.

In Italy, the Delta variant remains dominant, but Omicron is gaining ground.

Dr. Mario Sorlini, who is based near Bergamo, Italy — the medieval town known as Europe’s first Covid hot spot after it was ravaged by the virus two years ago — has been watching as case numbers have soared.

Dr. Sorlini recalled scrambling during the first outbreak to find oxygen tanks for patients with pneumonia who could not find a spot in crammed hospitals, as the army took coffins from warehouses for cremation.

But, at the moment, the situation feels different to him. Even though it is too early to know how Omicron will alter the course of the pandemic, his biggest worry so far has been keeping up with a surge in demand for swabs for testing.

The region is also confronting what he called a “mess beyond words,” as fear, infection, and isolation requirements combine to cause widespread staffing shortages.