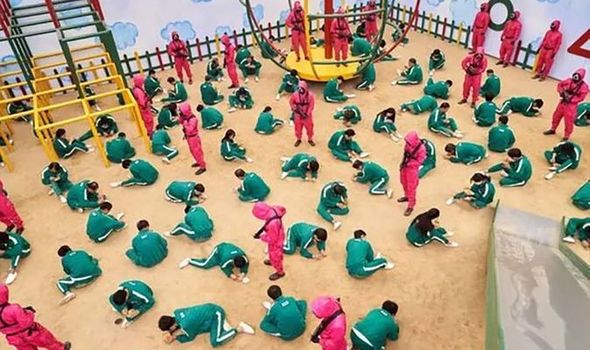 If you’ve missed it, Squid Game is a fictional survival series requiring people to participate in what appears to be children’s games. They either win or die trying, and the story focuses on a man willing to do anything to support his daughter and save his dying mother.

The series features plenty of mind-boggling puzzles and one in episode seven stumped Reddit users.

The following contains spoilers so look away if you are yet to finish the series.

What is the episode seven puzzle?

The puzzle involves a giant bridge of alternating stepping stones made of either tempered or normal glass. Steps of tempered glass will hold the weight of two people while normal glass cannot support one.

The vest number determines the order in which to cross the bridge and there is a time limit of just 16 minutes.

One Reddit user theydidthemath took to the internet forum to work out the best mathematical way to beat the game.

They said: “At each step the panes are randomized, and the players have no way of knowing which is which until they jump on one. Each step is essentially a 50/50 guess, and all 18 steps must be crossed in order.

“It’s not all luck though. The 16 players must cross the bridge one at a time, and they get to choose what order they play in.

“Each player gets to observe the progress of all those who went before them, meaning they can memorize which panes have been stepped on and which ones broke.”

The Reddit user wondered what was the best position to choose to have the best chances of safely crossing the bridge?

It might not be that simple though, as one user responded by saying: “If you wait in position 10 then you’re starting to have a realistic chance of making it ‑ six percent.

“But the odds are never really in your favour; even if time is no issue and you go at position 16 you only have a 36 percent chance of making it across. It’s like they WANT you to die.”

The top comment wins though, and is definitely the most complicated:

“Nice problem! This may be computed recursively as:

“Then the probability p(m,s=18) that the m-th player is the first to safely cross a bridge with s steps is:

Did that frazzle your brain too? To simplify, the user said: “It’s best to be tenth in line out of 16 players.”

We’re wondering why they didn’t just say that in the first place.