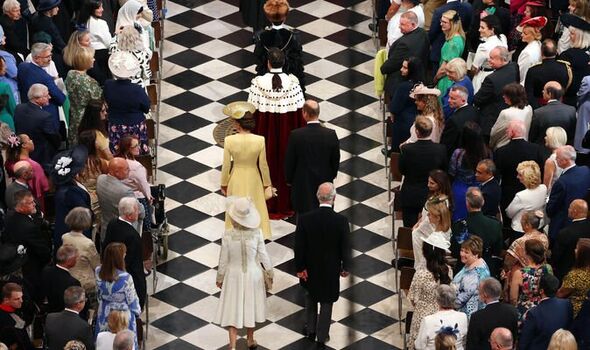 Setting aside their rifts at the National Service of Thanksgiving, the Royal Family put on a united front to express their love and respect for the woman who has ruled with such wisdom for the past 70 years. When we heard the Queen was not going to attend, hearts sank. This was a West End play without its leading lady. But, as ever, the show must go on. It was time for the understudies to take centre stage.

Yet with the Sussexes back in Britain, she was never going to be the sole star of the show.

After their brief appearance on Thursday, this was the first time Harry and Meghan had been on view with the Windsors since they quit two years ago. The pair drew cheers as they arrived.

Inside St Paul’s, all eyes were on the dynamics between the Sussexes and the senior royals.

The service was planned so the Sussexes should not feel slighted but it reflected the fact they no longer have a place in the front row of the Royal Family. It went like clockwork.

Reflecting this delicate balancing act, Meghan and Harry,  arrived first and had their own procession to their seats.

As always the Duchess of Sussex, in a chic but simple ivory dress and hat, exuded star quality. Holding hands as they walked down the long aisle, the 2,000-strong congregation trying to get a glimpse, Harry and Meghan seemed very close but somehow rather separate from the rest of the family.

They sat in the second row with Harry’s cousins, Princesses Eugenie and Beatrice.

Harry and Eugenie’s husband, Jack Brooksbank, clearly shared a friendly chemistry. Their smiles were perhaps the most obvious moment of warmth between the Sussexes and their relations.

Next it was William and Kate’s turn to be the focus of attention.

While the Duke of Cambridge looked suitably substantial for a future monarch, Kate was willowy and elegant in primrose yellow.

Prince Charles and the Duchess of Cornwall joined them, and the four senior royals walked to their seats. William looked sombre, aware no doubt how the future of the monarchy rests in his father’s and his hands.

At times, Charles looked equally serious; today was a celebration but there was an underlying elegiac quality, of an era gradually drawing to a close, and an uncertain future ahead.

While Thursday’s festivities were for the inner circle, yesterday was for the extended Royal Family to show their affection for the Queen.

Gone were the traditional horse and carriages and, instead, they arrived in a coach and formed a queue to get into the cathedral. As the older royals fade more into the background, younger ones come to the fore.

While Princess Michael of Kent looked ethereal in pearly grey, Zara Tindall was vibrant in a bright pink outfit reminiscent of her grandmother the Queen’s penchant for jewel colours.

But this service was not just a family occasion. One of the highlights was when young people from the different nations of which the Queen is head of state led “The Act of Commitment”, pledging to promote peace, justice and the environment. They represented diversity in words and action.

There was plenty of pageantry – the sea of clergy in their crimson and gold copes, the Yeomen of the Guard and the fanfare of trumpets and celestial music from the choir.

However, the service also reflected the Queen’s simplicity and modesty. Puncturing any potential pomposity, the Archbishop of York, Stephen Cottrell, was the ideal person to preach the sermon.

He was another understudy as the Archbishop of Canterbury has Covid.

With his down-to-earth style, Archbishop Cottrell made the congregation laugh as he mentioned the Queen’s love of horse-racing and reminded us that although not there, she was still very much “in the saddle”.

He also spoke of Her Majesty’s strong religious faith which has sustained her throughout her life.

God Save the Queen was sung and never had this been more heartfelt.

The show goes on but it is not the same without our leading lady.