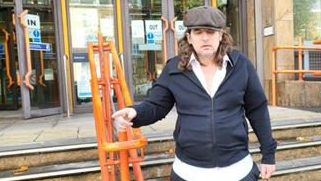 A stalker who left actress Claire Foy fearing for her and her daughter’s life should be deported to the US, a judge said.

Jason Penrose bombarded The Crown star with more than 1,000 explicit emails – including one that described her being raped, a court heard.

The 49-year-old from Florida also called Foy on the phone and, in December last year, he turned up at her home, where he repeatedly rang her doorbell.

Foy also begs colleagues and pals not to tag her in social media pictures in case Penrose uses them to track her movements, she added.

The 38-year-old star told the court she feared for her safety and felt helpless in her own home due to his ‘sustained, unwanted and obsessive behaviour’.

Delusional Penrose initially contacted Foy, via her agent, claiming to be a producer who wanted her to star in a sci-fi film, the court heard. He has also alleged Foy was romantically interested in him, claims she vehemently denies.

‘His relentless attempts to contact me are so traumatic. He has affected every aspect of my life,’ the star told Wood Green crown court.

Penrose was arrested soon after calling at her home and has spent nearly a year receiving psychiatric care at Whittington Hospital, in north London, at the taxpayers’ expense.

He admitted a stalking charge and twice breaching a court order at a hearing last month.

But Judge David Aaronberg KC said he needed assurances from the Home Office Penrose would be deported before he could pass sentence.

‘If decisions are made to deport him, I am likely to give him a suspended sentence with a restraining order. I want to make it part of any restraining order that he can’t enter the country,’ he added.

Penrose will next appear in court on January 20.