The devices were delivered to Waterloo rail station and administration buildings at Heathrow and London City airports on Tuesday.

The heart-shaped stamps with the words “Love Eire N” were issued as wedding stamps last year by Ireland’s postal service.

One package also had a return address that appeared to say Dublin.

A statement from Irish police said: “An Garda Siochana are assisting the Metropolitan Police with their enquiries.” 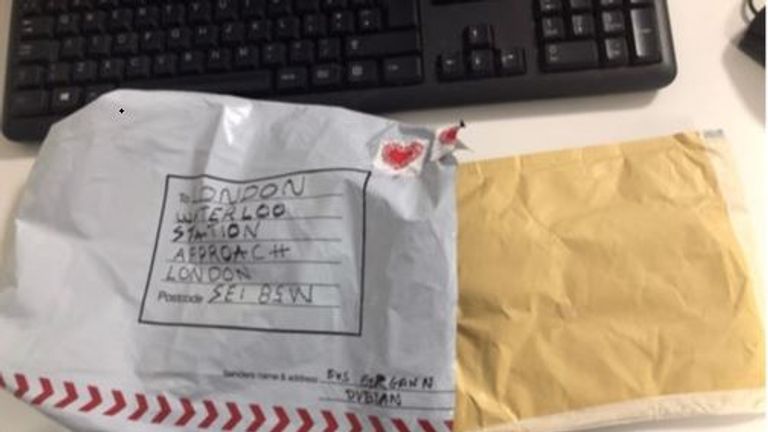 Police were called firstly to The Compass Centre, an office for Heathrow Airport, at 9.55am, where the package had been opened by staff.

A police spokesman said this had caused the “device to initiate [which] resulted in part of the package burning”.

The building was evacuated but there were no injuries. It remains closed as police continue their enquiries.

At 11.40am, police were called to Waterloo rail station, where another device had been sent to the post room.

The station was not evacuated but a cordon was put in place at an exit.

One slightly shaken-up man who was among staff outside the Network Rail office said he found the package there.

Asked about the discovery, he said: “I’m sorry, I’ve been told I can’t talk about it.”

A third device was received at Aviation House, London City Airport, and police were called to the scene at 12.10pm.

That building was also evacuated but the 100 staff were later allowed to return to work. Counter-terrorism police said the incidents were being treated as a “linked series” but they were “keeping an open mind regarding motives”.

Police confirmed the devices inside the packages were “small improvised explosive devices” and described them as “not sophisticated”.

“These devices, at this early stage of the investigation, appear capable of igniting an initially small fire when opened,” they added.

Sky News Ireland correspondent Stephen Murphy said from Dublin: “The news of this Irish connection has been greeted with widespread surprise here.

“Security sources have told me that the MO simply doesn’t fit that of any dissident Irish republican organisation.

“Security sources here are saying that if any Irish dissident group tried to send explosive devices by mail to the United Kingdom, the odds are they would be of a more sophisticated and more harmful design.

“So at this early stage of the investigation…it probably isn’t looking like an Irish dissident republican group behind this, but we’re no closer to knowing who it was.”

Flights and train services were not affected at any of the three sites, although Docklands Light Railway services near London City Airport were briefly suspended.

No arrests have been made and police advised transport hubs across London to be vigilant and for people to report anything suspicious.

Caitlyn Smith was watching her 10-year-old nephew Tuesday when she decided to film herself holding a handgun.  The teenager went to eject the gun's magazine,…