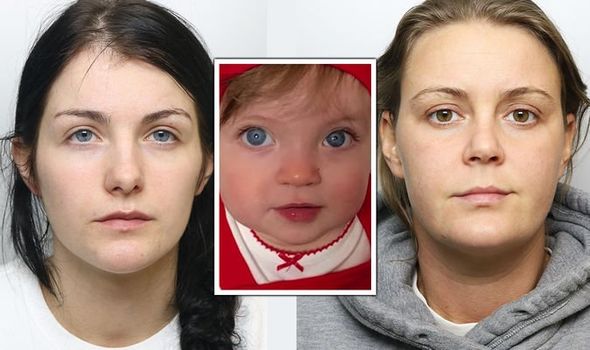 Savannah Brockhill was jailed for a minimum of 25 year’s the 16-month-old’s murder while Star’s mum, Frankie Smith was sentenced to eight years for causing or allowing her death. Their case will be examined under the unduly lenient sentence scheme. A spokesman for the Attorney General’s Office confirmed it had received a request to review the sentences, adding: “The Law Officers have 28 days from sentencing to consider the case and make a decision.”

A former bouncer and security guard, Brokhill laughed as the sentencing hearing got underway.

Mrs Justice Lambert said Brockhill had shown no remorse for Star’s killing, which she had denied.

She added: “[Star] was 16-months-old when she was murdered. Her short life was marked by neglect, cruelty and injury. She was murdered by you, Savannah Brockhill.

“Frankie Smith, it was your role, as her mother, to protect Star from harm. You have been convicted by this jury of failing to protect her and, thereby, allowing her death.”

Brockhill and Smith managed to convince social workers marks on Star were accidental or that complaints were made maliciously by people who did not like their relationship.

Star suffered extensive damage to her abdominal cavity “caused by a severe and forceful blow or blows, either in the form of punching, stamping or kicking to the abdomen”, jurors heard.

Prosecutors said that a clip from a CCTV camera showed Brockhill delivering 21 blows to Star in a car over a period of nearly three hours, some while the toddler sat in a car seat.

The horrific footage came from a camera at a recycling plant in Doncaster where Brockhill was working as a security guard. It was filmed about eight days before Star’s death.

He questioned why social services and the police did not act in spite of five family members and friends raising the alarm with the authorities eight months before Star’s death.