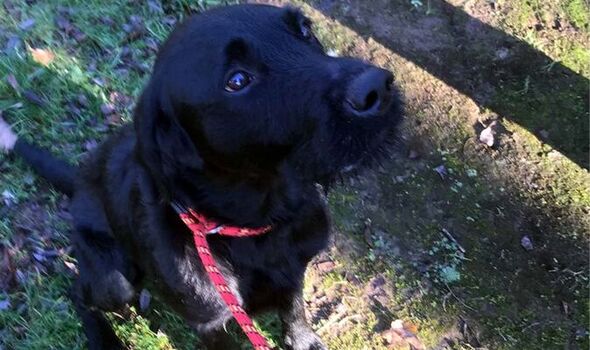 Finley’s owner was prosecuted this week, and pleaded guilty to causing unnecessary suffering to an animal. Finley’s companion, another Labrador cross called Alexa, had been “skeletally” thin and near death. Such was her desperate condition, that vets decided the most humane course of action was to put her to sleep.

On Monday, North Wales Live reported that a man has been banned from keeping animals after his two dogs were found in a “skeletal” and “emaciated” state, with one “near death”.

Prosecutor Tudur Owen said Alexa was still breathing but “unresponsive” and covered in urine and faeces. Vets agreed it was in the dog’s best interests that she be put to sleep. The condition of Finley was “the worst of a living dog he had seen”, according to one vet. He was emaciated and had sores.

Fortunately for Finley, the RSPCA has cared for and rehomed him – and he is now set for a tail-waggingly happy ending.

Samuel Matthew Hill, 28, had suffered poor mental health and had brought his pets himself to the charity, Caernarfon Magistrates Court heard. Hill, of Llanberis, admitted causing unnecessary suffering to protected animals and was disqualified from keeping animals for an unlimited period.

Finley spent a number of months at an RSPCA centre and went from strength to strength, the RSPCA said. When he was signed off by the vet, he was happily rehomed with owners in an undisclosed location.

RSPCA inspector Andy Broadbent told North Wales Live: “You wouldn’t even recognise him now. It is remarkable that he pulled through so well.

“I’m delighted that he has had his happy ending with a new home. He is such a bouncy and happy dog – I struggled to get a good photo of him as he is so full of energy, which is just fantastic to see.”