Officers will gain new powers to stop adults with convictions for knife and other weapons offences with the introduction of Serious Violence Reduction Orders (SVROs), but the highly influential think tank argues police must also be able to search young people. Polling by YouGov found 73 percent of British adults think the orders should apply to people as young as 12, with 88 percent saying 14 years old should be included. Only two percent thought it should apply only to those aged 18-plus. Andy Cook, chief executive of the CSJ said that “children and young people are just as capable of knife crime as adults”.

He said: “The police have a very difficult job stopping crime on our streets, and it’s the Government’s job to help them. They should have appropriate powers to stop and search people recently convicted of carrying a weapon.

“Data shows that many children and youths are likely to carry weapons and so it follows that this measure should be applied to under-18s too. This measure would deter some repeat offenders and ease the job of reducing crime in the most dangerous areas of the country.”

Last month the Home Office announced SVROs will be trialled by the Thames Valley, West Midlands, Merseyside and Sussex forces.

Courts can make an SVRO when a person is convicted of an offence involving a knife or “offensive weapon”. Officers then have the power to stop and search him or her to look for weapons. 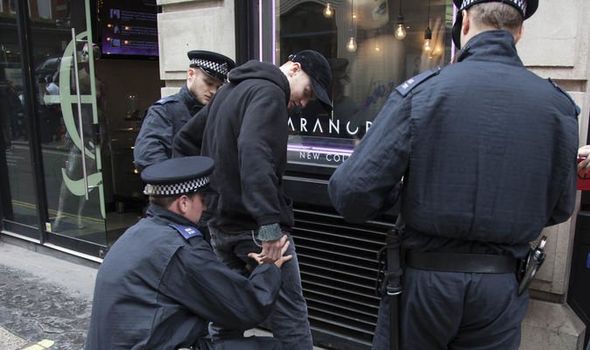 The Government insists stop and search is a “vital tool” and claims that last year it helped take 11,000 dangerous weapons off the streets.

Shipley Conservative MP Philip Davies warned that unless the orders applied to 12-year-olds it would create a “loophole” that criminals would exploit.

He said: “I very much agree with the CSJ that they should lower the age limit, otherwise it creates a huge loophole that will be exploited. If we are serious about tackling crime we’ve got to be tackling it irrespective of the age of the person who is perpetrating it.”

A Home Office spokeswoman said: “We are absolutely committed to cutting crime, getting knives off our streets and putting violent criminals behind bars. The Serious Violence Reduction Orders don’t currently apply to under 18s as we recognise that cases where children are caught carrying knives are sometimes best addressed through more rehabilitative means, such as the Criminal Behaviour Order or the new Knife Crime Prevention Order.

“We are currently piloting the use of SVROs across England and will consider all evidence before deciding if we need to review who they apply to.”