With bosses keen to clear stockrooms before a feared further lockdown, customers are set to spend £2.5million a minute this weekend – today alone may see £1.65billion fill the tills. Footfall today is expected to be 12 percent up on last year, said experts at VoucherCodes.co.uk and the Centre for Retail Research.

Around 42 million shoppers are likely to descend on high streets with “Stampede Sunday” tipped to lure customers who have missed online retailers’ guaranteed festive delivery times.

Millions are expected to spend £1.2billion in shops on Monday with £1.1billion next day, research by VoucherCodes.co.uk found. Its lifestyle editor Anita Naik said: “With a turbulent few weeks for consumers and retailers alike, it’s not surprising to see that there are still huge numbers of us heading out to finalise our shopping.

“With most of the country under strict Tier 2 and 3 restrictions, as well as social distancing rules in place in stores, it’s likely that shoppers will be ‘mission shoppers’ – armed with a list of last-minute essentials for the big day.” 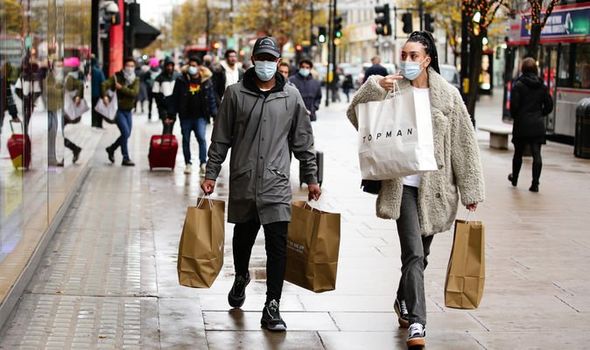 Struggling retailers who began offering big discounts from Black Friday last month will offer further cuts for savvy savers holding out on buying presents in the final days before Christmas. Dan Whytock, chief executive of Down Your High Street, said physical stores could use bargains to recoup sales missed in lockdowns and to shift stock.

“Retailers will be doing all they can to maximise their selling window pre-Christmas as they have been unable to trade most of the year. Physical retail might actually have an opportunity to recoup some of their lost sales in the last week before Christmas as consumers start to see warnings about ‘last day to purchase for Christmas delivery’ across shopping websites,” he said.

Topshop, Mango, H&M and Moss Bros are offering up to 50 percent off in store. River Island has discounts of up to 40 percent while M&S cut prices by up to 30 percent.

Debenhams is already giving up to 70 percent off but may drop further in its closing down sale.

Retail analyst Richard Hyman said: “There will be unprecedented discounting…retailers have all that stock and they’re very, very nervous about the idea that if they don’t go on sale now, they might be shut down.

“No one really knows from one week to the next whether they will be able to open. It’s become very, very fluid and very, very uncertain.”

He said formal wear and office clothes were proving very hard to shift, even with discounts. 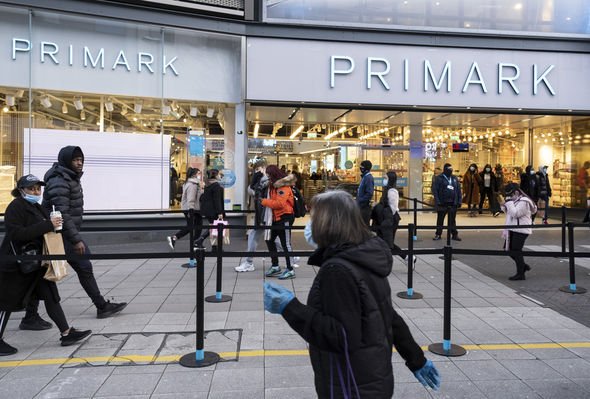 Nearly one in five people (19 percent) plans to shop in stores in the run up to Christmas, a poll for the Daily Express by global market research firm Dynata found. Of those venturing to physical retailers, 42 percent aim to do all their festive buying on Wednesday and Thursday while 58 percent said they were waiting to do some of it.

Families said the advantages of shopping just before Christmas were bagging bargains (32 percent), followed by it helps to feel like a normal Christmas (31 percent). Chris Watson, of Dynata, said: “For those of us that do intend to hit the shops before the big day, the driving factors seem to be the desire to have a ‘normal’ Christmas and to save money – both unsurprising when we look at the extraordinary year.

“The pandemic has had a huge impact on the personal finances of the nation, so the promise of discounts and sales is perhaps hard to resist for some shoppers this year.” 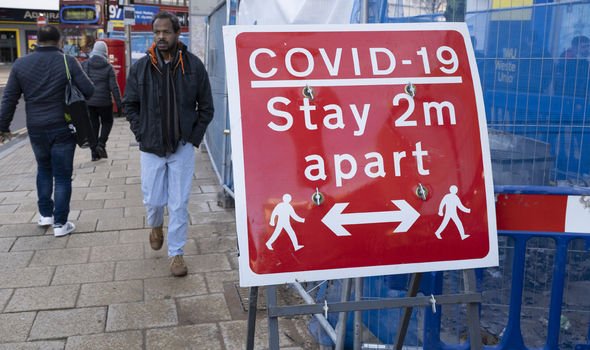 Market researchers Spark asked more than 1,000 people if a sale would tempt them into a Christmas purchase and 52 percent said Yes.

Jack Hillaby, head of business development at the agency, said: “People have smaller budgets for Christmas this year. They will be spending less on presents, planning to buy fewer of them and seeing fewer people. While everyone is looking for value for their money, the big stash of presents under the tree on Christmas morning just isn’t a priority while so many are unable to see their loved ones.”

Other research found one in five people (22 percent) said visiting shops was more convenient for last-minute shopping than online. Simon Tune, of payments firm Elavon which commissioned it, said: “The appetite to support the local economy is strong. People have an emotional bond with our high streets.”

M&S will open for longer from Monday until Wednesday with 400 stores trading until midnight and other top firms have extended their hours to try and recover lost sales.