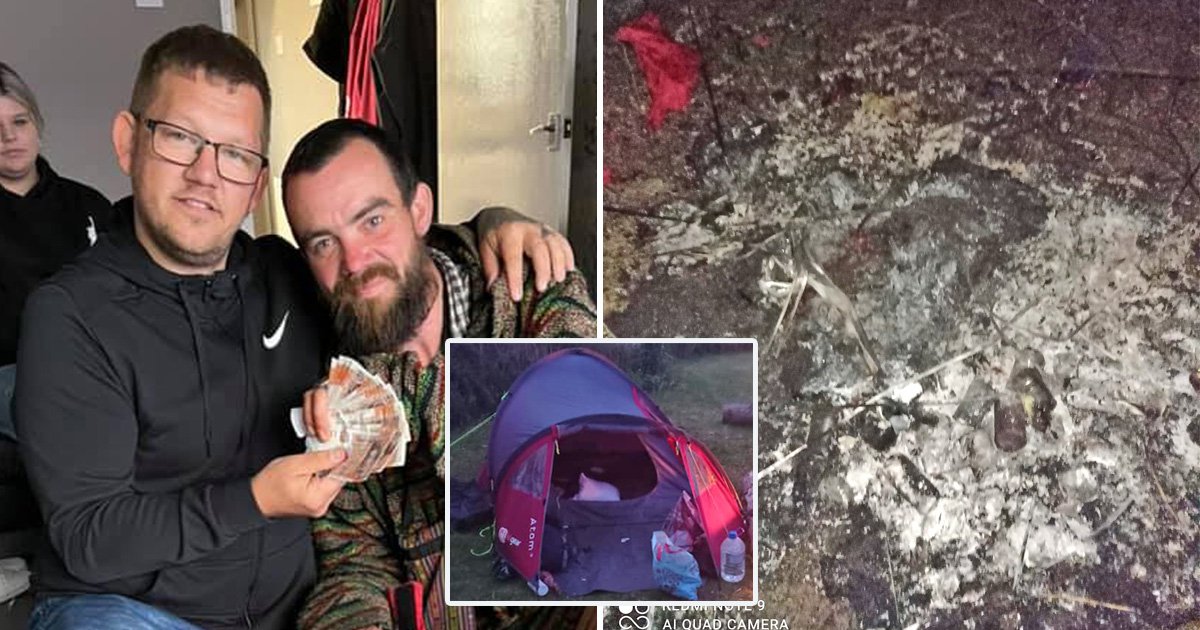 A homeless man was left devastated when his tent and ‘everything he owned’ was ‘burnt to a crisp’ in a ‘deliberate’ fire – but has now been helped back on his feet by kind-hearted strangers.

Stephen Bowditch, 40, left his tent in Lodmoor Country Park in Weymouth as he headed out on a stroll with dog Hades to prepare for a charity walk on April 29.

He was heartbroken to return and find ‘a big pile of ash where his tent was’. He also lost his clothes, solar panels to charge his phone, camping equipment, food and bedding.

Speaking to the Dorset Echo, Stephen, who has been homeless for five years, said he ‘can’t understand why someone would do that to me’.

He said: ’I was completely shocked and I was struggling to think of why it happened or why someone would do this.

‘It looked like some of my belongings had been searched and stolen and other bits were burned along with the tent.’

But Stephen’s faith in humanity was restored when the local community stepped in to help.

After he shared the dreadful news on Facebook, his social media was flooded with donations and supportive messages from complete strangers.

He was ‘nearly in tears’ as old school friend Lee Stocker raised £200 by asking individuals and businesses for donations.

Explaining why he sprung into action, Lee said Stephen is ‘a very generous person and a person who has fallen on hard times.’

Stephen said: ‘I cannot believe the generosity of people who have helped me and it just shows that there are decent people are out there despite what happened.’

The rough sleeper, who is a recovered drug addict, is now living in a new tent on another patch of land.

He is in talks with local services about getting housing, but is having trouble finding somewhere that accepts dogs.

He insists there are ‘other people more in need of housing than him’, adding that he can’t leave Hades, who has ‘saved his life’.