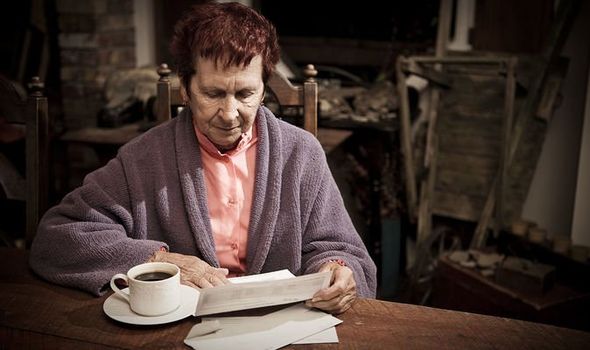 They are demanding a rise in the annual Winter Fuel Payment ‑ currently worth between £200 and £300 to pensioners. It has been frozen since 2011 but if it had increased in line with inflation it would stand at £249.28 and £373.92. People already facing the pension triple lock cut are calling for the fuel payment to be index-linked to rising energy prices.

Your campaigning Daily Express is backing the call and urging the Government to raise this winter’s fuel allowance because of the extraordinary circumstances.

Last night Mr Johnson said: “We will do whatever we can to help people. You’ll also see increases in people’s incomes and that is also very important.”

The PM was suggesting inflationary income rises would bring some relief. But campaign group Silver Voices accuses the Government of allowing the Winter Fuel Payment to “wither away”.

They said older people were already struggling with the suspension of the triple lock guarantee on their pensions, the removal of the free TV licence for the over 75s and rising household costs.

Now, next month’s energy bills are expected to rise by £139 for 15 million households due to a gas shortage driving up wholesale prices.

A second record high is predicted next spring, which could add between £178 and £294 to the typical price of a default dual-fuel energy deal.

The fuel poverty charity National Energy Action (NEA) added its voice to calls for enhanced support, warning that the physical and mental health of millions are at risk.

Latest Government figures show that 3.18 million households in England ‑13.4 percent of the total ‑ are in fuel poverty, a measure based on income, energy efficiency and energy prices.

Dennis Reed, the director of Silver Voices, which campaigns for over-60s, said: “We suspect that the Government is allowing the benefit to wither away into insignificance, before axing it completely.

“Energy price increases in October will exceed the total fuel payment for millions of older people and plunge more into fuel poverty.

“This is a lifeline benefit for many struggling pensioners, who will have to choose between eating and heating this winter.

“A harsh winter coupled with sky-high energy prices will surely lead to thousands of preventable deaths.

“People should not be dying of cold in a civilised country, but that is the sad reality.”

Caroline Abrahams, charity director at Age UK, said: “The Winter Fuel Payment is a lifeline for many older people on low and modest incomes over the winter months, giving them the confidence to turn their heating on when they need it.

“With tens of thousands of excess winter deaths every year and more than two million pensioners living in poverty in the UK, the payment is an essential tool in the battle to stay warm.”

Peter Smith, director of policy and advocacy at the NEA, said: “Higher energy prices, reduced incomes and poor housing will badly damage the physical and mental health of millions this winter.

“Frail, elderly households are often most at risk of needless winter deaths and for those who live on the lowest incomes, their budgets are at breaking point.”

Analysis from Age UK reveals it would take a state pensioner more than six weeks to pay off an energy bill at the current price cap. Next month the cap will rise to £1,277 ‑ meaning it would take seven weeks of state pension payments to afford.

It is poised to rise again when it is reviewed in April, meaning it could take upwards of two months to pay off.

But not everyone is convinced that the best way to support pensioners is the Winter Fuel Payment.

Baroness Ros Altmann, a former pensions minister, said: “The payment is not means-tested, so they tend to benefit the UK’s wealthiest pensioners more.

“Maybe the Government could add a heating element to the pension credit. But it would be a shame to give lots of extra income to pensioners who don’t need it.”

There is further support including cold-weather payments of £25 for those on certain state benefits, warm home discounts worth £140 for those receiving the guaranteed credit part of Pension Credit or on low-income, and grants from energy trusts.

The Winter Fuel Payment is for anyone born on or before September 26, 1955.

A Government spokeswoman said: “We are committed to supporting low income and vulnerable households to keep warm during the colder months. Our strong package of policies will deliver to those in need.”

People 66 or over should automatically get their Winter Fuel Payment credited to them in November or December.

Do you fear having to turn off your heating to put food on the table this winter? Please email our reporter sarah.o’[email protected] or call 0208 612 7069.

All households that are reliant on universal credit or with income just above will struggle to pay bills this winter.

The latest news that fuel costs will rise is yet another blow for both working age and retired people to bear.

Marry this with the Government’s decision to impose pay freezes on public servants such as nurses and health workers.

All this will happen while the price of just about everything increases. These are cruel blows for every citizen in the UK.

Ministers are just not taking a holistic view of their decisions and who they impact upon.

For pensioners in particular higher utility bills is yet another attack on their income.

The Winter Fuel Payment, which helps older people heat their homes, has been frozen for a decade, which is why the National Pensioners Convention is calling for an urgent increase.

This would be something the Government could do quickly, so pensioners do not have to make heart-breaking choices about eating or turning on the heating.

With the most inadequate state pensions in the developed world, our older people are currently dealing with a raft of cuts and increased charges.

These range from losing an element of the pensions triple lock to new plans to charge for prescriptions in certain age groups, council tax increases and huge gas price increases ‑ all on top of over-75s now having to find the money to pay for a TV licence.

These assaults on their income will lead to an increase in poverty, misery and potentially winter deaths among our oldest and most vulnerable.

If this Government really is serious about levelling up, they must make raising the winter fuel allowance a priority.

But for longer term security they must work rapidly towards sustainable fuels and increasing support to those in need, whatever their age.

Most importantly they must make decisions that improve the lives of citizens rather than consigning them to the 1940s.