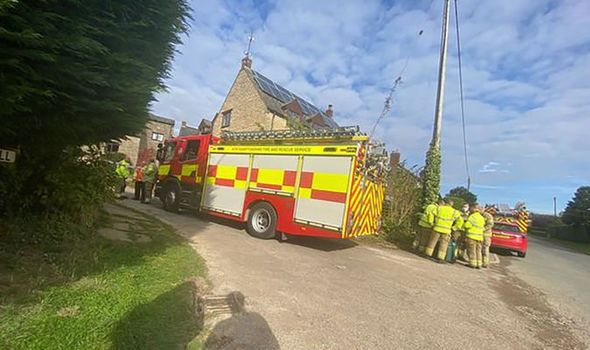 Julia and David Toman noticed a “rotting egg [stench] and the smell of death” in their home for around two days. The couple checked their drains and even had their oil boiler checked at their property in Banbury, Oxfordshire.

But their daughter Lucy, 22, noticed all of her silver jewellery had turned black and tarnished.

She recalled, from her A-Level Chemistry days, hydrogen sulfide had a rotting egg smell, and would turn silver jewellery black due to oxidation so alerted her parents.

After they were called, the fire service spent seven hours at the rural home, Oxfordshire Live reports.

Julia said: “There was two fire engines, two fire cars with toxic control people, two Anglian Water vans and an ambulance to check our blood oxygen levels and to do an ECG.

“They (the fire service) were here for around seven hours.

“We knew that the gas could be toxic.”

Effects of inhaling hydrogen sulfide range from mild, headaches or eye irritation, to very serious, unconsciousness and death, according to the US government website.

But Julia and her family were given the all-clear after tests at Horton General Hospital in Banbury.

They were told they would not be able to sleep in their own home until the situation had been resolved.

The family has, however, been allowed back into their property as the gas is no longer present.

Julia said: “Luckily we had such an amazing support system in the village, and were able to stay with friends in the area while they waited for the all clear.”

They have now said they want to share their story to warn others of the signs of the toxic gas.