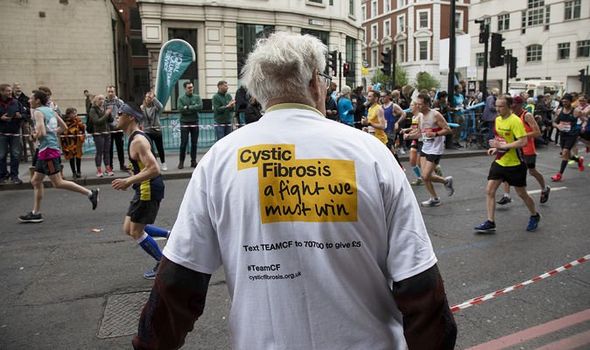 There are 10,500 people in the UK with cystic fibrosis, which affects the digestive system and destroys the lungs with sticky mucus. A Daily Express campaign helped bring to 90 percent of sufferers a daily pill called Kaftrio to alleviate the worst effects.

But the work of The Cystic Fibrosis Trust to find a drug to help the other 10 percent ‑ and eventually a cure ‑ has been held back by Covid damaging fundraising. So a crew of cystic fibrosis superstars will push themselves to their limits for the charity.

Daily Express writer Carlie Pleasant, 31, whose life was changed by taking Kaftrio, said: “The Trust and their helpline are the backbone of our community as they work tirelessly to fund research.”

The charity’s Beverley Burnham-Jones said: “We’re so grateful to our supporters, some of whom have cystic fibrosis. Their inspiring efforts make a massive difference.”

Beth takes on her seventh marathon since June

Beth Wood will lace up her trainers again on Sunday ‑ her seventh marathon since June while struggling with cystic fibrosis.

She is tackling 30 26.2-mile runs in a year for the Trust but cannot tolerate Kaftrio. Beth, 30, of Folkestone, Kent, said it’s “very hard” as her lung function can hit 20 percent.

She said: “I will dedicate this one to my little daughter Aurora. She is the reason I’m doing it.”

He began after daughter Rachel, 29, was born with cystic fibrosis ‑ and in 2015 he was awarded a British Empire Medal for his efforts.

The Cystic Fibrosis Trust ambassador, of Castlederg, County Tyrone, said: “About 90 per cent of cystic fibrosis sufferers can access treatments but 10 percent cannot. We must keep fighting.”

Natalie wants to show son Preston, 10, who has cystic fibrosis like her, that anything is possible ‑ and is running despite hurting her back.

The mum of two, 39, of Northampton, was diagnosed when pregnant with Preston, as babies were not tested for Cystic Fibrosis in the 1980s.

She said: “I’m determined to run close to my personal best and raise awareness and funds for the Cystic Fibrosis Trust.”

Mum’s going for a record

Doctor Jane Faulkner is hoping to smash a Guinness World Record by finishing in under five and a half hours ‑ while dressed as a rose.

The costume worn by Jane, of Sutton Coldfield, West Midlands, is inspired by a famous 1960s quote by a cystic fibrosis child who could not pronounce the condition, and said: “I have 65 roses.”

Jane said of the Cystic Fibrosis Trust: “They are huge champions both for raising awareness but also pushing the Government to pay for new therapies.”