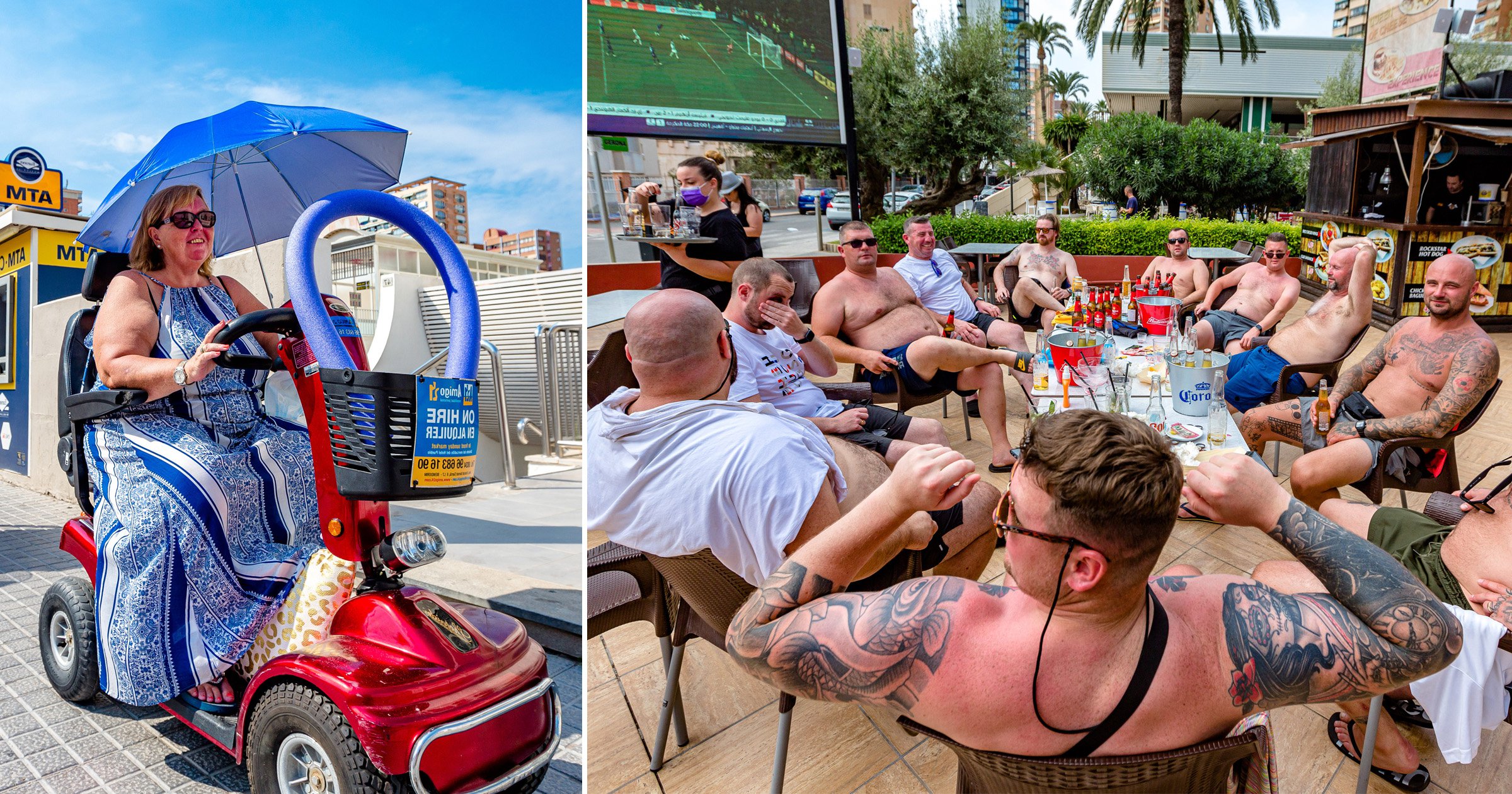 British holidaymakers are flooding back to Benidorm after the traffic light system was scrapped and travel rules were relaxed.

The Spanish resort town’s famous Little England area is buzzing once again after months of misery caused by coronavirus restrictions.

Some hotels catering for British tourists have reopened for the first time in more than a year.

It comes as new rules intended to make travel ‘easier and cheaper’ came into force on Monday.

The traffic light system involving green, amber and red lists has been dropped, with locations now categorised as either red list or not. Spain had previously been on the amber list.

Bars and nightspots in the heart of Little England are now back in business and recalling staff who had been furloughed at the height of the health crisis.

Holidaymakers have been taking advantage of the Spanish sunshine to top up their tans and enjoy a cold pint outdoors, with temperatures set to peak at 25C this week.

The mobility scooters made famous by the ITV series of the same name have also started reappearing.

Figures released by local hotel association Hosbec at the start of September showed the percentage of British holidaymakers staying in town had passed 11% of the total, up from around 5% earlier in the summer.

They ended up attributing for 16% of the total in September, down on the usual 40% at this time of the year, but still the highest percentage since March last year.

The overhaul of the traffic light system and scrapping of both fit-to-fly and day eight tests is expected to lead to a surge in holidaymakers jetting to Benidorm for some autumn sunshine.

Alex Fratini, a member of Benidorm bar and restaurant association Abreca, said: ‘Many businesses have reopened after many months closed because the Brits have started to return.

‘Bars are hiring staff and that’s a good sign.’

‘We hope this continues and more Brits come.’

‘There’s a British atmosphere in Benidorm which reminds me of the atmosphere of old before the pandemic struck.

‘Around 20% of the holidaymakers in town at the moment are now British and with the other 20% who’ll hopefully return now the restrictions have been eased, we’ll be back to the way things were three years ago.

‘We’re hopeful that’s going to happen. All the bars and cafes in the Little England area are open and doing good business because they’re packed.

‘We think the number of Brits holidaying here will rise rapidly and there could be a massive surge.

‘It looks like it’s going to be a good autumn and a good winter, possibly the best winter we’ve had for the last few years.

‘We know the Brits want to come to Benidorm and with the lifting of restrictions, that’s obviously going to encourage them to get on planes.’

Following the overhaul of travel rules, double-jabbed holidaymakers returning to the UK from countries not on the red list can now enter without a pre-departure test.

They also no longer have to take a PCR test eight days after their arrival or isolate at home.

Just a single test is now needed on the second day after arrival in the UK.

Also, from the end of October, they will no longer be required to take a PCR test on day two of their arrival in England – just a lateral flow test.

If the lateral flow test is positive, they will need to isolate and take a confirmatory PCR test at no additional cost.

People arriving from a red tier destination will still be required to spend 11 nights at a quarantine hotel costing £2,285 for solo travellers.