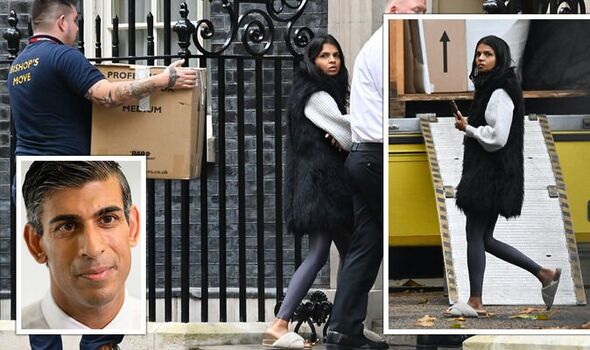 Rishi Sunak and family are returning to Number 10 Downing Street – where he lived as Chancellor. Most Prime Minister’s prefer to stay in the more spacious Number 11 flat.

The Prime Minister’s wife was spotted directing movers carrying what appeared to be a double mattress, barbecue and piano back into Downing Street.

Ms Murty was wearing fur sliders, grey leggings and a light grey jumper as she oversaw the move from the family’s £6.6 million Kensington townhouse.

One picture shows her appearing to speak with workers from removal firm Bishop’s Move as they prepare to move what looks like an upright piano into the flat.

Conservative Party Chairman Nadhim Zahawi was also seen walking past in a navy tracksuit and green baseball cap as the movers unloaded the two vans.

Since Tony Blair opted to take the more spacious Number 11 flat in 1997, it has become the custom for PMs to reside there.

However, the Sunaks appear to have chosen their old apartment at No10.

There was speculation over where the family would decide to live as Rishi Sunak had been splitting his time between his west London home and Number 10.

However, earlier this week his press secretary confirmed the couple would be moving to Downing Street.

His Press Secretary said: “They will be moving into the No 10 flat, where they used to live.”

When asked if the PM planned to renovate the flat his press secretary said: “Not that I’m aware of.”