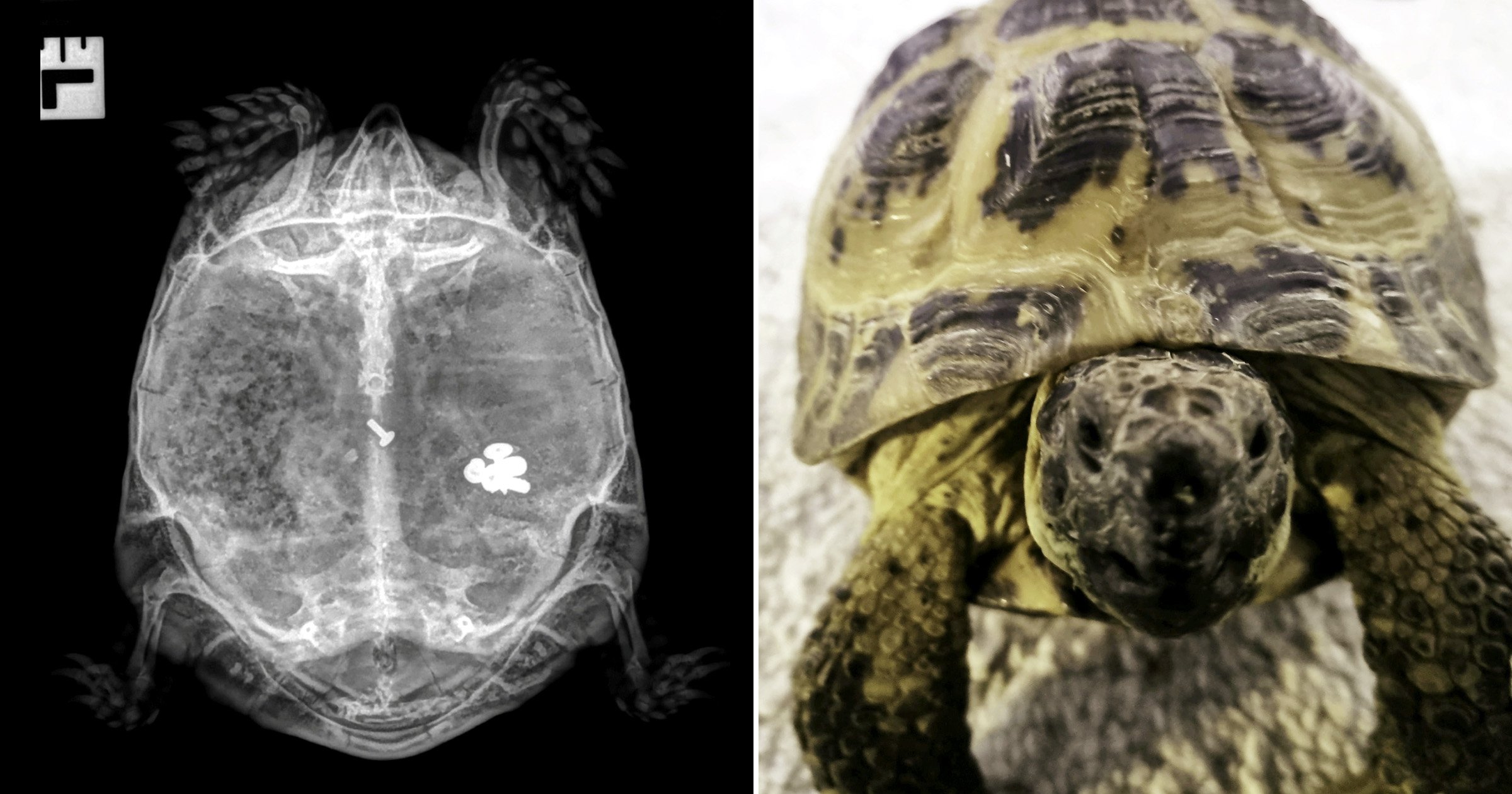 A pet tortoise named Sherman had to undergo risky surgery after almost dying from swallowing a packet of screws.

Owner Suzette Jones noticed her Horsfield tortoise, 17, had lost his appetite before vomiting in her Guildford home.

With his whole life ahead of him (Horsfield tortoises live for some 100 years) Suzette rushed Sherman to the local vet.

Alder Vets surgeon Colin Clarke was stunned to discover that Sherman had gobbled down six metal screws now lodged in his stomach.

The reptile had to be referred to a specialist 50 miles away in Snodland, Kent.

Daniel Calvo Carrasco of Sandhole vets initially tried to get the screws out by performing an endoscopy, which involved passing a camera down his throat.

But the screws had passed too far through Sherman’s intestinal tract, so the only option was a dangerous operation.

Surgeons placed Sherman under anaesthetic and had to cut open his shell before getting into his stomach to retrieve the screws, now in his colon.

The three-hour operation thankfully didn’t leave him shell-shocked as Carrasco managed to get the screws out and re-attach his shell with dental putty.

Health and wellbeing adviser Suzette said: ‘I first realised something wasn’t right with Sherman when he vomited twice, which is unusual for tortoises.

‘When the vets told us the diagnosis following the initial scans [our] reaction was just one of sheer amazement.

‘We just couldn’t think of where the screws had come from. We could only guess that they were in a plant pot which he knocked over and was found sat of top of the earth and munching.

‘After then being told Sherman would need an operation to remove the screws, we were obviously very concerned but thought he must be given a chance.

‘The vets were excellent throughout and gave us good explanations and were clearly interested and concerned about Sherman’s welfare, which helped reassure us.’

Sherman is now recovering at his home and his appetite for fresh greens (and hopefully not screws) is back.

‘He was somewhat grumpy at first as his daily antibiotic injections were clearly disliked,’ added Suzette.

‘But now his daily bath has been reinstated he has become more active and interested in life again amongst the living room plants.’