Prince Harry and Meghan Markle exchanged ‘supportive touches’ to comfort each other during their appearance outside Windsor Castle this evening.

Both had joined Prince William and Kate to view floral tributes and meet with wellwishers.

For nearly an hour, the two couples spoke with distraught royalists and accepted gifts and flowers.

As they walked through the gates of Windsor Castle, Prince Harry reached out to grasp his wife’s hand.

They then stood closely together to observe various notes and mementos left in the Queen’s memory.

At one point, Meghan placed a hand on the small of Prince Harry’s back as he studied a bouquet.

The 37-year-old offered a gentle smile in response before they continued on their walkabout round the castle gates.

Body language expert Judie James told the Sun: ’It’s comforting to see Meghan’s supportive touches on the back and partial hugs for a clearly upset Harry.’ 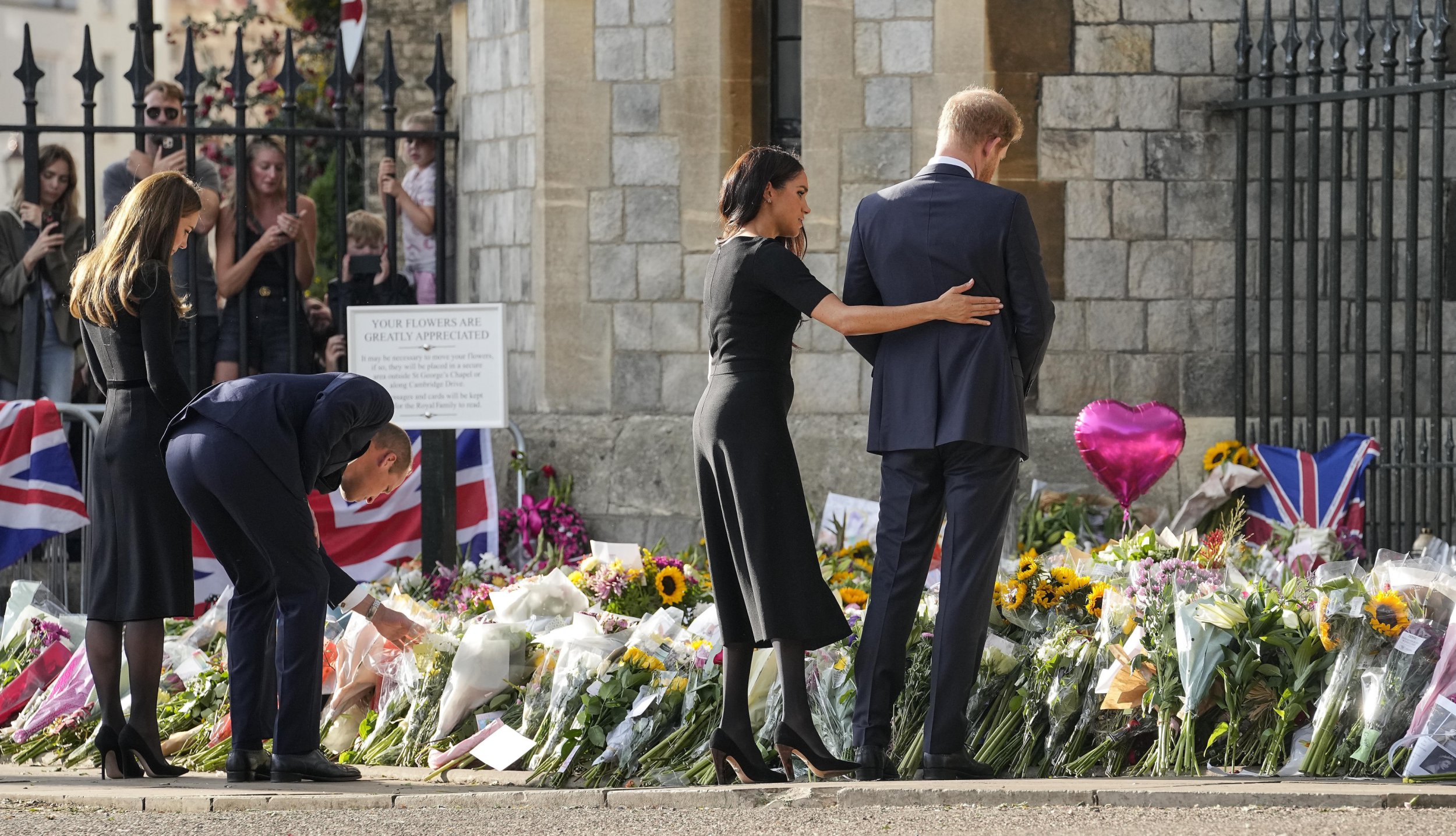 At one point during the walkabout, Meghan was seen being given a close hug by a young girl in the crowd.

She was also seen shaking the hands of several children and well-wishers at Windsor.

The 41-year-old also walked over to a section of the crowd and approached a teenager, who was seen putting her hand over her mouth in shock.

The duchess and her husband spoke briefly for a few moments and Meghan could be seen assuring a young girl by putting her hand on her shoulder.

In response, the girl then said: ‘Can I have a hug?’ and Meghan was seen nodding, before leaning in and giving her a big hug.

Prince William had asked his brother and his wife to join them in viewing the tributes, it was revealed this evening.

A royal source said: ‘The Prince of Wales invited the Duke and Duchess to join him and the Princes of Wales earlier.’

All four of the family members were dressed in black as they walked along the gates of the castle this evening.

The last time William was joined in public by his brother at Windsor Castle was at the funeral of the Duke of Edinburgh in April last year.

Both couples left in the same vehicle as the engagement, which lasted more than 40 minutes, came to a close.