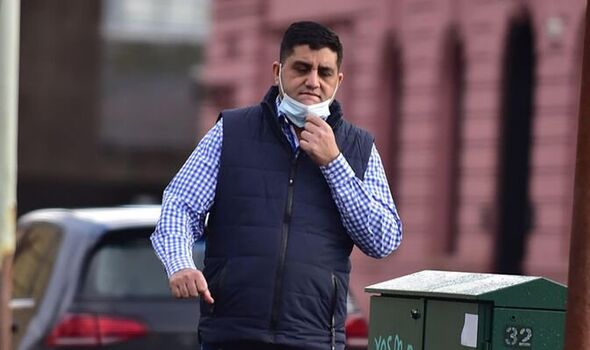 Abdul Samad preyed on the 20-year-old as she waited for her cab on a street in the early hours of the morning. A court heard Samad, 39, convinced his victim he was a private hire driver and then assaulted her repeatedly as he sped his silver Nissan Primera down a motorway.

The brazen delivery driver even stopped at his customer’s address to hand over a takeout before returning to the car to continue the assault.

He was found guilty of sexual assault but failed to appear yesterday for the verdict or sentencing and a warrant has now been issued for his arrest.

It took the jury of nine men and six women 15 minutes to find Samad guilty at Glasgow Sheriff Court.

During the trial, they had heard procurator Fiscal Depute Mark Allan ask Samad: “You were a man in his late thirties and your position is that a 20-year-old stranger at the end of her night, desperate to get home, couldn’t keep her hands off you? Are you seriously asking us to believe that position?”

The victim had been drinking with her friends in Glasgow before going to a pal’s flat just after 3am on the Tradeston area of the city, reports Daily Record.

At 5am, her friend called an Uber as the victim’s phone was out of battery and she walked outside to be picked up.

Samad spotted her and moved his window down to communicate with the woman, saying he was her cabbie.

The victim told the court: “The car slowed down, so I wrongly identified it as my taxi. I told him where I was going and he said he could take me.”

The woman said she got in the front seat because it made her feel more in control.

She said there was a Just Eat delivery bag and a child carrier in the back seat of the married dad-of-two’s car.

Samad sped onto the nearby M74 on-ramp heading east, the opposite direction to the woman’s parents’ home.

She said: “Before we even reached the motorway he started acting inappropriately. He asked whether I had any undergarments on and touched my leg.

“He told me to relax and stop crying, multiple times.”

As they sped along the M74, Samad grabbed her hand and thrust it down his trousers.

He then continued to sexually assault her in a prolonged ordeal.

She said: “He alternated doing that all the way on the motorway. I felt too scared to stop him. He was so much bigger than me. I tried to ignore him and just stared out the window. I was crying the whole time.”

Ten minutes before Samad picked the woman up, he was captured laughing on CCTV collecting an order from takeaway Guru Grill in the city centre.

Samad, who is a father, made the delivery, even returning to his vehicle to retrieve a money bag while waiting for his customer, claiming he feared his victim might steal it.

The young woman said that she was “frozen” by fear and didn’t dare to escape or scream while Samad did his delivery. She said: “I was so far from home. I was frozen by what had happened. I was too scared.

“I just wasn’t sure what this man was capable of.”

Samad’s shift was finishing, so when he returned to the car, he told the weeping girl he would take her home.

It was almost 6am when he dropped her off near her west end home. Once through the door, she changed into her pyjamas and ran into her dad’s bedroom.

Giving evidence, her father said: “She was crying, ‘Oh daddy’. She hadn’t called me daddy since she was a child. I knew something was seriously wrong.”

Hysterical, she told her dad she had been sexually assaulted and he immediately called the police.

After a 10-day investigation, police officers had to force entry to Samad’s house to arrest him when he refused to answer the door.

Samad initially claimed nothing had happened in the car until it emerged his DNA was on the girl’s clothes and the twisted predator then claimed she had forced his hand on her and touched him against his will.

Speaking about her ordeal, the victim said: “When you go through something as traumatic as that, you can never forget what’s been done to you.

“You try to forget the face behind it. I did everything in my power to try and get that man out of my head.”

The girl, now 23, said that the experience was so traumatic she was placed on antidepressants and developed an eating disorder.

Despite the weight of evidence against him, Samad had pled not guilty to the charges.

Although he was carrying a Just Eat bag and the Guru Grill restaurant is registered with the food delivery company’s app, Just Eat insisted that Samad was not on their list of registered delivery drivers.

A spokesman for Just Eat said the company did not have anyone with Samad’s name listed as a driver and could not establish if he was doing a delivery through its app on the night of the attack.

She said: “Carrying a Just Eat bag is not evidence of somebody delivering on behalf of Just Eat – because many self employed couriers often deliver for multiple apps.”