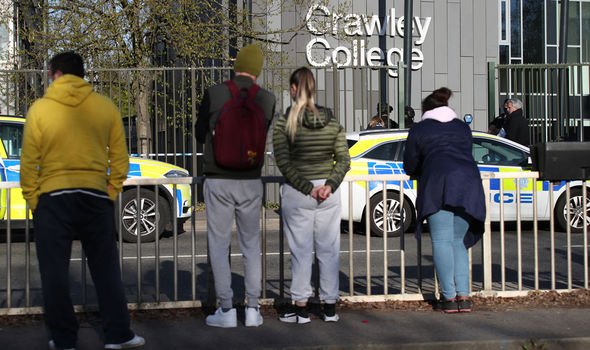 Armed police were scrambled to the colleges after two people were injured – one of whom was reportedly the brave tutor. Footage on social media showed the teacher pinning the masked gunman to the ground before a number of other people, also said to be staff, rushed to help. Dozens of armed police, including counterterrorism officers from nearby Gatwick Airport, stormed the site and searched classrooms, while a helicopter flew overhead.

Terrified students at Crawley College, a further education facility in West Sussex, said the gunman used a knife to stab the teacher in the hand before firing what were believed to be blanks from a black pistol directly at another lecturer.

The assailant was then tackled to the ground.

He entered the college’s car park at 3.10pm and waved the large pistol around.

One 17-year-old student said: “I heard several shots being fired really quickly and everyone dived out of the classroom.

“The gunman was wearing a black Puma hoodie and a mask. I was only a few yards away and I could see he had this pistol in his hand and was waving it around.

“He continued ranting and shouting, telling people to ‘Run, run’. He was trying to scare people, deliberately. Everyone was pretty scared. 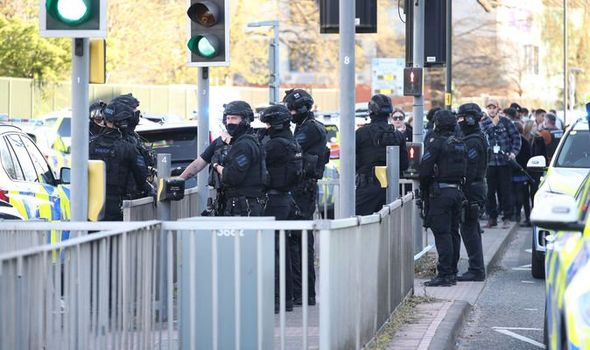 “He pointed the pistol at my tutor and fired but they were just blanks, thank God.”

Another witness, Owen Smith-Carretero, 21, said: “There was a helicopter flying above. Ambulance there, three or four incident response units.

“They were swarming. They were walking up and down the road about 30-35 police officers, dozens of police cars and emergency vehicles.”

Sussex Police confirmed that two college workers were treated for minor injuries, which were not gunshot wounds. An 18-year-old man from Crawley was detained at the scene.

Pupils and staff were evacuated to a safe space while police carried out a search.

Chief Supt Howard Hodges added: “All lines of enquiry are open at this stage.”

Henry Smith, MP for Crawley, tweeted: “I pay tribute to Sussex Police and Crawley College staff for their professionalism, calm and care in responding to the incident.”