PARIS — With the smell of tear gas and smoke still lingering in Paris and other cities after a fourth weekend of protests, France’s president planned a nationwide address on Monday to respond to the anger among many middle-class and working-poor citizens frustrated over their declining economic means.

The televised speech by President Emmanuel Macron, announced by the Élysée Palace on Sunday, will be his first substantive public answer to the so-called Yellow Vest movement that has transfixed France and spilled into other countries in Europe.

Mr. Macron has been conferring with advisers and ministers and will meet with a wider group on Monday, including local elected officials, members of Parliament and union representatives, to discuss proposals aimed at addressing at least some of the movement’s demands.

“Clearly we have underestimated the need of our fellow citizens to speak up about the difficulties they face and to be involved in the formulation of solutions,” Benjamin Griveaux, a government spokesman, said in an interview Sunday on Europe 1 Radio. 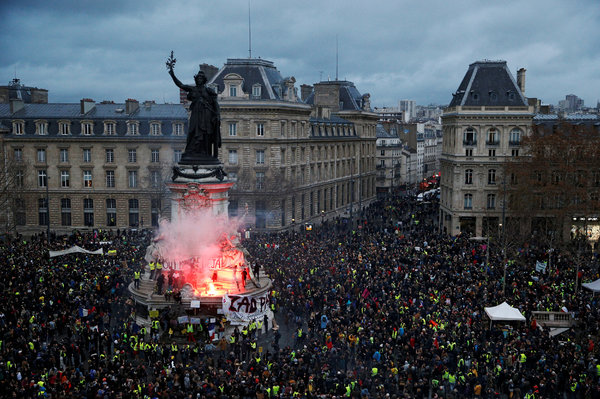 “The solutions that we need to find must take into consideration each person’s reality — it’s almost like tailored to fit,” he said. “The anger that is being expressed is sometimes very different from one area to another.”

The Yellow Vests take their name from the fluorescent hazard vests adopted by the protesters as a sign of their economic distress.

The challenges Mr. Macron will face in speaking to his fellow citizens are considerable.

He must connect with the many who feel abandoned and make clear not only that he understands their anger but also that he is prepared to listen to their ideas and take action, analysts said.

At the same time, he must project strong resolve against the destruction of private property to preserve the allegiance of the small-business owners who have seen their shops vandalized or who have been forced to close on successive Saturdays. Mr. Macron must also stand with the many French who have been outraged by the desecration of national monuments, or who have seen their cars burned or other property destroyed.

With fires lit by protesters still smoldering in some of France’s largest cities on Sunday, local officials and small businesses voiced their dismay over the vandalism and lost business during the usually busy Christmas season.

Although the authorities released numbers suggesting that the protests on Saturday were smaller than those on earlier weekends, the final total showed that there was no difference between those on Saturday and those a week earlier, suggesting they were not abating.

The mayor of Bordeaux, Alain Juppé, who has been generally supportive of Mr. Macron, summed up the messages he hoped the president would send on Monday as he walked through his city. Fires burned there for several hours on Saturday as violent confrontations between the police and the Yellow Vests punctuated the protests.

Mr. Macron needs to “speak to the French people and speak quickly,” said Mr. Juppé. The president, he said, needs “to respond concretely to certain legitimate expectations” with “understanding, empathy.”

But Mr. Juppé said Mr. Macron also had to project firmness and speak with “authority” about the need to maintain order and stop the vandals.

Mr. Macron’s address will be the first time in about 10 days that he has said anything beyond a short statement at a news conference in Buenos Aires at the end of the G-20 meeting.

That statement came just a few hours after attacks on the Arc de Triomphe by Yellow Vests and vandals, known as “casseurs.” They defaced it with graffiti and broke into its museum. Then they smashed shop windows on a nearby avenue, stealing goods and destroying bank machines.

This past weekend’s violence was notable both for its spread to a couple of neighborhoods of Paris that had been less affected in past weeks and by unprecedented violence in Bordeaux, where protesters and casseurs set multiple street fires and besieged one of its oldest shopping streets.

If the Yellow Vests movement’s ability to bring business to a halt appears unchanged, so does its standing with the public nationwide. Although relatively small numbers of people go into the streets — France has a population of 67 million and the most that have turned out to protest is less than 300,000 — support for their grievances remains at about 70 percent, despite the violence and destruction of property, according to several different polls.

The movement’s persistence suggests that despite the government’s announcement that it would drop a planned increase in the fuel tax in 2019 and delay an increase in the cost of home heating until after the winter, the protesters and those who support them may not be appeased without a deeper look at the distribution of wealth in France.

The main difference between the protests this weekend and those on the last one was an increase in the police presence and a more aggressive strategy by the authorities. That meant there were many more arrests, some even before the demonstrations began. Nearly 2,000 people were taken into custody nationwide, almost three times as many as on Dec. 1, when 682 were arrested.

The numbers of injured this past Saturday were fewer than on Dec. 1. A total of 325 people were hurt, including police officers, compared with a total of 485 the preceding week, according to revised figures from the Interior Ministry.