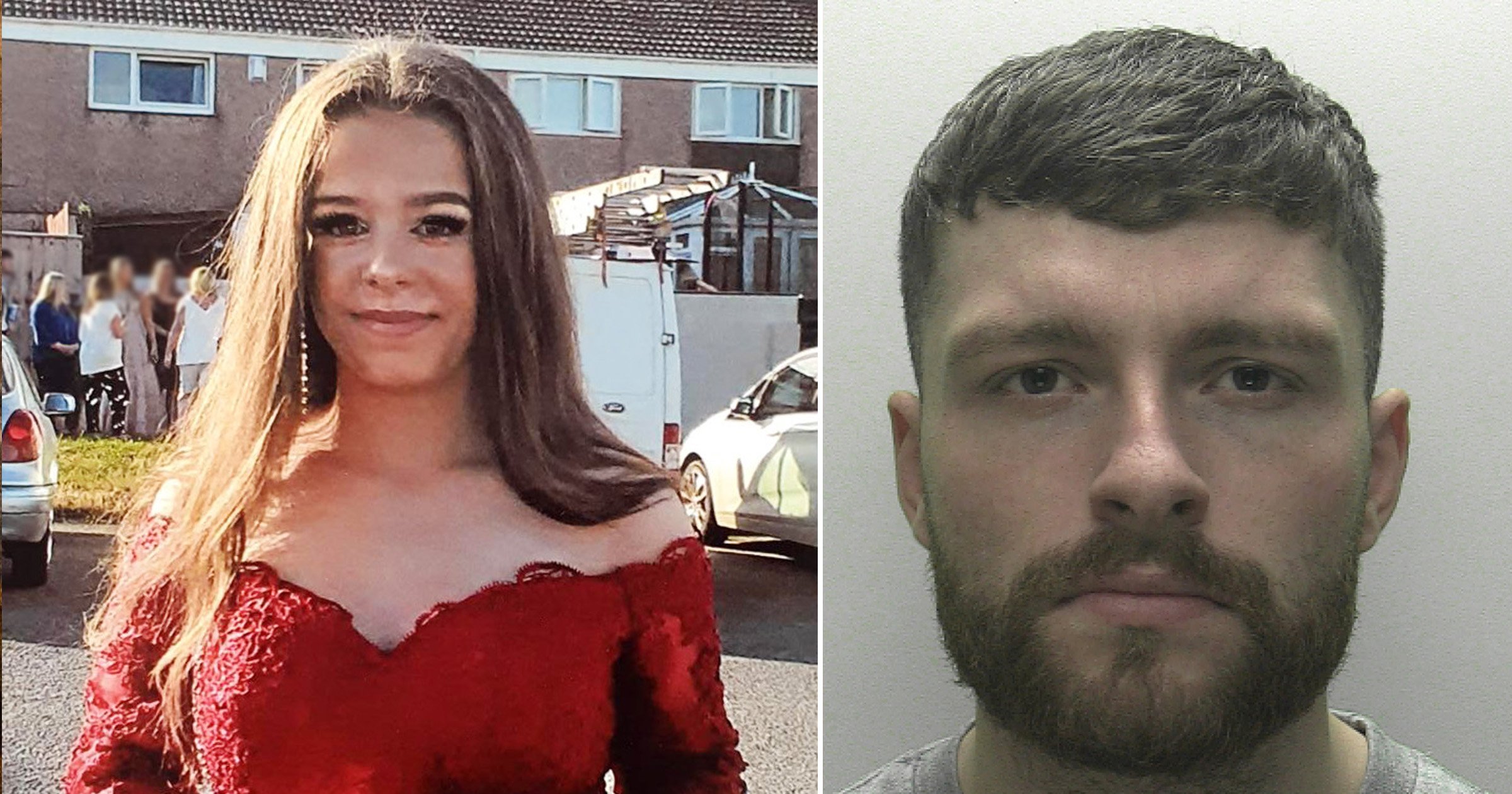 The musician who brutally bludgeoned 18-year-old Bobbi-Anne McLeod with a claw hammer while acting out his morbid fascination with serial killers like Ted Bundy has been jailed for life.

Cody Ackland, 24, a guitarist with local indie band Rakuda, attacked the teenager as she waited for a bus in Plymouth in November last year.

Ms McLeod’s family listened to the harrowing details of her final moments being outlined in public for the first time as Ackland was sentenced at the city’s crown court on Thursday.

She was found on the afternoon of Tuesday November 23, naked and face down about 15ft down a steep wooded embankment near the coastal beauty spot of Bovisand, a few miles up the coast of Plymouth.

The teenager died from multiple injuries to her head and face, which could only have been inflicted ‘during a prolonged and frenzied attack’.

A forensic investigation of Ackland’s car found extensive blood staining throughout the vehicle, including in the footwell of the passenger seat, where he forced Ms McLeod when he first snatched her from the bus stop.

In a police interview after handing himself in, Ackland described catching the teenager’s eye as she fell and then stuffing her in his car as she sat up and tried to scream.

He told officers he had to prop Ms McLeod up as he guided her towards the wooded area where he would murder her, saying she told him: ‘I’m scared.’

After recounting how the teenager was still breathing despite suffering 12 blows to the head and face, Ackland chillingly remarked: ‘It’s not funny but she started to make a noise and I thought “f****** hell, wow, I mean hats off to her”.’

He then said he finally choked the life out of her by treading on her neck.

Ackland, from Southway, Plymouth, pleaded guilty to murder and was jailed for life with a minimum term of 31 years.

Judge Robert Linford said it had been a ‘prolonged, savage and merciless attack’.

He told Ackland: ‘[Ms McLeod] was a young, popular and much-loved person, you caused outrage and fear in this part of the country and with good reason, it was utterly motiveless.’

The judge said Ackland would remain indefinitely a ‘highly dangerous person’, adding: ‘There is a strong possibility you may never be released from prison.’

Her mother Donna wept throughout the hearing.

Richard Posner, prosecuting, said Ackland was leading ‘a double life’ and harboured an obsession with serial killers in the UK, Australia, US and Russia.

Mr Posner said Ackland had conducted extensive searches about ‘their crimes, the aftermath of such crimes, and the bodies left behind in days leading up to Bobbi-Anne (McLeod’s) death’.

He said he had also been trawling the web pages of DIY stores for ‘hammers, crowbars and cutting tools’.

‘Cody Ackland led a double life. When he left home on November 20 and drove through Leigham in Plymouth towards the bus stop where Bobbi-Anne was,’ the prosecutor said.

‘He held such an unhealthy fascination and desire to imitate serial killers. His fascination was to become an unimaneagable wicked reality for Bobbi-Anne.’

The court heard that police found a trove of over 3,000 dark and disturbing images on Ackland’s phone.

Many of them were of the mutilated bodies of murder victims, as well as murder weapons, soiled and bloodied clothing, and the sites victims were found out.

Killer hid his obsession with murder from all who knew him

The brutal murder of Bobbi-Anne McLeod by Cody Ackland left even veteran detectives bewildered, as the aspiring rock star had never revealed his obsession with violence to a soul.

Ackland struck Ms McLeod, 18, twice to the head with a hammer as she waited at a bus stop close to her home in Leigham, Plymouth on the evening of November 20 last year.

He then bundled her into the footwell of his car and drove her 19 miles to a remote car park on Dartmoor where he bludgeoned her to death.

None of his relatives or friends knew he had been stockpiling images of dead and maimed bodies and murder weapons for months, and scoping out Dartmoor.

The day after the murder, Ackland was back out socialising, joining rehearsals with his band Rakuda, and partying into the small hours at a pub lock-in.

The only difference friends noticed was that Ackland, described as usually introspective and someone who struggled to share his emotions, was ‘happier than usual’.

They said the only time they saw him in such an amped-up and joyful state was when Rakuda was getting ready backstage at a gig.

By Tuesday of the following week, Ackland had turned himself in, telling police he had dumped Miss McLeod’s body in undergrowth in Bovisand – a beauty spot a few miles up the coast from Plymouth.

He told police the murder had not even been on his mind over the previous three days because it was ‘so out there’ it was like a film or a fantasy.

Ackland claimed he felt low on the day of the murder, had been for a drive to clear his head, and come across Miss McLeod when he took a short-cut through Leigham on his way to the town centre.

The killing was the first time Ackland had ever come to the attention of the police, and not a single person who knew him had even the vaguest idea of his dark predilections.

Speaking at Devon and Cornwall Police headquarters in Exeter, Detective Superintendent Mike West said investigators had been through Ackland’s past ‘with a fine-tooth comb’ and found nothing to link him to previous crimes.

Ackland had no mental health issues, not suffered any obvious childhood trauma, and had never mistreated former girlfriends.

Mr West said: ‘In all honesty the reason that this investigation will last with me way beyond after I retire is because of its sadistic nature and the lack of a trigger event to cause it.’

Two days the murder, he also looked up Richard Chase, the Vampire of Sacramento, and ‘Richard Chase bodies’.

The day before handing himself into police, Ackland also searched for serial killer Ed Kemper.

Mr Posner said: ‘His interest in the macabre presents as deep-rooted; a fascination with death, murder and murderers and the means to commit murder.’

He told the court Ackland’s attack on Ms McLeod bore a striking resemblance to Bundy’s modus operandi, having approached her from behind and struck her with the hammer before bundling her into his car.

Rakuda, who released their first EP in August last year, announced in November they would disband ‘with immediate effect’, but weeks later said they would be taking a ‘short hiatus from the music scene’ with a view to reforming in the spring of 2022.