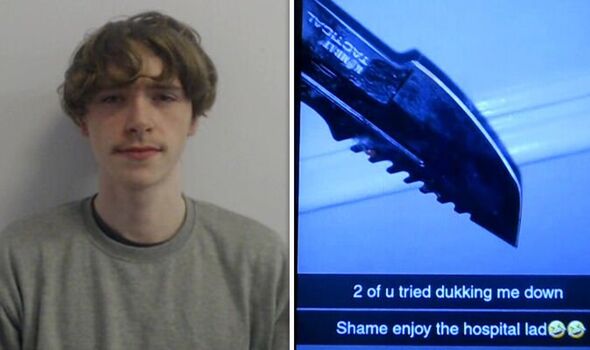 Kyle McGuinness, 17, can now be named and pictured after reporting restrictions to protect his identity due to his age were lifted. The teenager sent a sickening message on Snapchat, a social media app, following the stabbing, writing “Two of you tried dukking (stabbing) me down. Shame enjoy the hospital lad,” alongside a picture of the blade.

The young victim spent 10 days in intensive care with stomach wounds and would have died without the intervention of medics at the Manchester Royal Infirmary, the court heard.

McGuinness was handed a nine-year sentence earlier this week as he was branded “dangerous” by a judge. The sentence comprises five years in prison, and a four-year extended licence period, reports Manchester Evening News.

A court heard McGuinness got into a verbal altercation with two 16-year-old boys, including the victim, over “territory” on August 18 last year in Ashton-under-Lyne, Greater Manchester.

“What the f***, are you good bro?”, the 16-year-old victim said. The row then referenced ‘Bridge’, slang for Stalybridge. “Where’s Bridge? I don’t even know where Bridge is bro,” the defendant said.

“Where’s your boy? Tell me where the f*** he is,” the 16-year-old said. McGuinness, who was said to be “terrified”, ran away and the two 16-year-olds began to chase him along a road in the town centre. McGuinness suddenly stopped and stabbed one of them to the chest, after pulling a knife from his waistband.

Manchester Crown Court heard McGuinness suddenly stopped and stabbed one of the boys to the chest, after pulling a knife from his waistband.

McGuinness was eventually given bail and was subjected to an “intensive” package of supervision.

But he went on to stab another victim in broad daylight at about 10am on January 15 this year. Two young men, aged 16 and 21, were chatting outside shops in Trafford, Greater Manchester.

At first, they seemed to be on friendly terms, but later the mood turned sour. Shortly after McGuinness arrived, the 21-year-old “lunged” at him while armed with a hammer.

McGuinness then stabbed him to the chest, and the 16-year-old began repeatedly punching him, kicking and stamping on him. The attackers fled and the victim suffered a punctured lung.

Defending, Gwen Henshaw said McGuinness had become “entrenched” in the “culture” of knife crime. She said he has a low IQ and has suffered from undiagnosed ADHD.

McGuinness suffered violence as a child and was placed in care, she added. McGuinness, of no fixed address, pleaded guilty to section 20 assault, section 18 assault, and two counts of possessing a bladed article.