A teenager has recalled the terrifying moment he lost his thumb after he was injured by exploding fireworks.

Rio Diveney, 16, ‘blacked out’ during the terrifying incident.

The fireworks set fire to his clothes, and Rio then passed out as the emergency services were called.

His hand had been split down the middle due to the impact of the firework, with one of his fingers left ‘hanging on by skin.’

Rio was rushed to hospital where doctors inserted pins into his thumb before they were fortunately able to stitch it back onto his hand.

As part of a new campaign to raise awareness of the dangers surrounding Bonfire Night, the 16-year-old has recalled the horrifying incident.

The teen, from Oldham, told the Manchester Evening News: ‘I blacked out for 10 to 15 seconds then my other friend said to me “you’re on fire!”.

‘So I pulled my clothes, my top and my coat off and I was just like “what’s happened?” I looked at my hand and thought “I need to go to hospital.”‘ 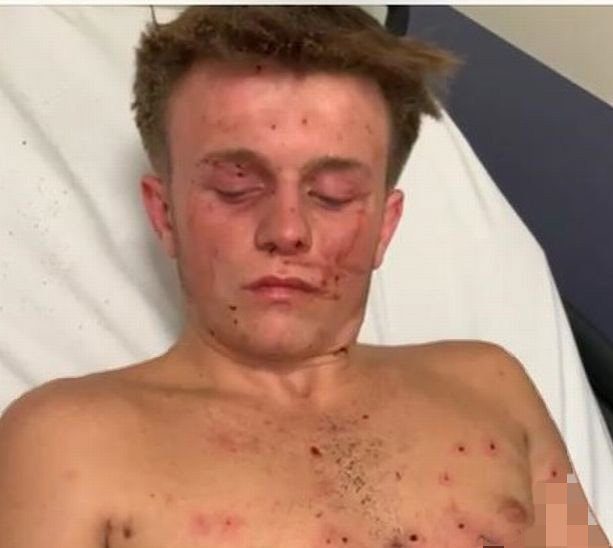 Rio went on to describe how he ‘will never mess with fireworks’ again following the terrifying ordeal.

‘I’ve learned that if someone offers you a firework, don’t take it. Think about what can actually happen,’ he said.

A spokesperson from the Greater Manchester Fire and Rescue Service said: ‘Rio was seriously injured by an exploded firework last year during the Bonfire Night period. We’re sharing Rio’s experience to remind people to stay safe while celebrating.’

Fireworks are dangerous if they get into the wrong hands as has been demonstrated recently.

Some were recently hurled at police officers in Stratford, London, during a Halloween disturbance which lasted well into the night.

A TikTok post had reportedly encouraged teens to attend dressed in black ready for the ‘firework wars’.

Disturbances were also reported in Dundee, Scotland, where teens caused chaos with fireworks at a council estate.