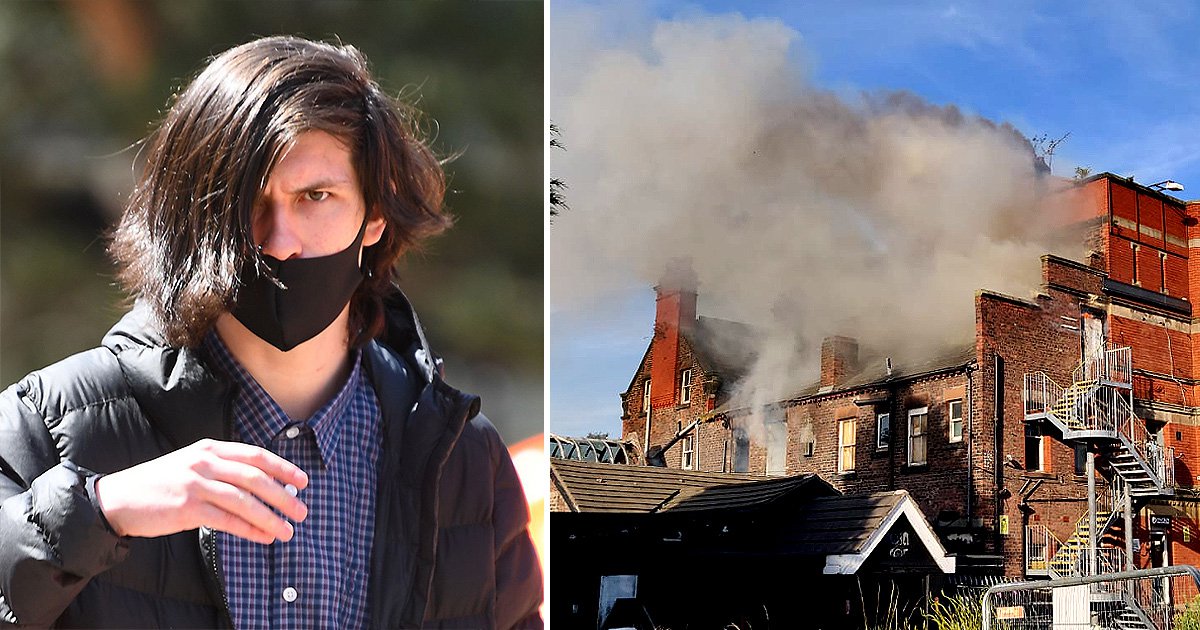 A teenager who set fire to two buildings after he was dared to do so by a friend has been given a suspended sentence.

Luke Edwards-Meredith, 19, burned down an empty barber’s shop and the former Hotel California and Revolver pub in Birkenhead, Merseyside within the space of an hour.

Half of Merseyside Fire and Rescue Service’s entire resources were used to tackle the two blazes on August 24, 2019.

But a judge accepted the teen’s ADHD played a key part in the arsons and locking him up would harm his mental health.

Edwards-Meredith, who was 17 at the time, told friends at a youth club he had set fire to the buildings and was later arrested.

He confessed to arson in an interview, but said a friend had ‘dared him’ to do it.

Liverpool Crown Court heard how he’d broken into the barber’s through a window, and lit paper in the kitchen to ‘calm himself down.’

Edwards-Meredith claimed he had not to intended to burn the building down, but said looking at the fire relaxed him.

The teen was diagnosed with ADHD early in his childhood which ‘leads to impulsivity and acting without thought’, the court heard.

He then got into the old bar via a broken fence and set fire to wood, wallpaper and a towel, before running away after the flames got out of control.

Firefighters tackled the blaze at the barber’s shop for more than five hours and it caused £35,000 of damage to the building, which was left structurally unsafe. Damage was also caused to two adjoining flats.

It took more than seven hours to contain the fire at the bar and police had to close major roads in the area.

But the building was already set for demolition and the value of the damage was ‘unquantified’.

More than 50 firefighters and 12 fire engines attended the two blazes in total, placing a significant strain on the resources of local fire service.

Edwards-Meredith wasn’t charged until February 3 this year due to delays in the case and his defence lawyer, John Weate, said this was ‘intolerable’.

He said his client should have been charged and appeared before the youth court in 2019, but instead the two convictions for arson will now follow him throughout his adult life.

Mr Weate said Edwards-Meredith had since decided not to socialise and stay at home, which he thought was the ‘safest’ thing to do. He now has a girlfriend and hoped to get a job.

Judge Brian Cummings, QC, said what the teenager did was ‘very serious’, but he had to sentence him based on his age at the time and accepted that ‘immaturity played a part’ in what happened.

A psychiatric report found there would be significant risks to the teen’s mental health if he was sent into custody which would be harmful to him and potentially to others.

The judge handed him an eight months sentence, suspended for two years, along with rehab and 100 hours of unpaid work.