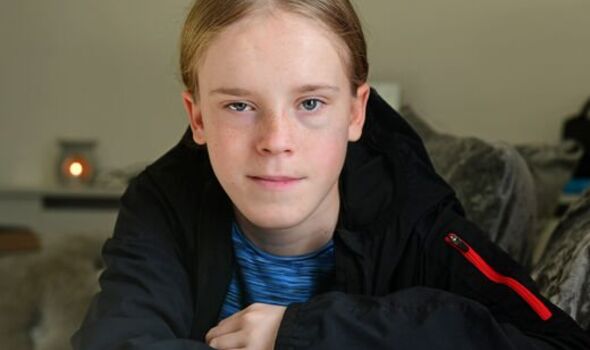 A horrific video shows the moment a teenage girl with a heart condition was knocked to the ground, choked and kicked in the head in a vicious attack by a group of girls.

As this disturbing video shows the bullies are relentless grabbing, pushing and intimidating Evie as shoppers pass by in the busy pedestrian area.

Evie’s mum said if her daughter had been kicked in the chest she “could have been killed”, the Liverpool Echo reports.

The violent tussle which has sickening echoes of the death of another Liverpool schoolgirl Eva White.

Eva was stabbed to death in the city centre after she was attacked after going to see the Christmas lights switch on November 25 last year. A 14-year-old was jailed for life for a minimum term of 13 years in July for her murder.

During the attack on Evie on Friday night dozens of passers-by ignored the helpless Academy of St. Nicholas pupil as she was surrounded and attacked by the bullies, who also stole her mobile phone

Evie’s mum Carol told the Liverpool Echo: “It’s just disgusting. Evie is traumatised, we all are. The fact that this kind of thing can happen to your children in the middle of the city in broad daylight.

“Evie has heart problems. If she’d been kicked in the chest, she could’ve been killed.”

Evie, who lives with her family in Speke, Liverpool, suffers from pulmonary atresia, a life-threatening heart defect which prevents blood flowing to the lungs.

She has undergone multiple heart surgeries, and is currently awaiting a further operation to replace an artificial valve as she grows.

In a video taken and posted on social media, the teenager can be heard shouting “I can’t breathe” as she is grabbed and thrown to the ground.

Her grandmother Maureen Mutch, 62, said: “Evie was walking around and there was a group of kids from her school shouting abusive words at her.

“She felt a bit intimidated because there was a gang of them. They shouted at her to go over to them; she walked up to them and one of them jumped up and smacked her in the face.

“Evie was trying to get away from them but they all circled around her. The girl grabbed her by the neck and threw her to the ground and they all started kicking her.

“Everyone who has seen the video is mortified. There was no reason for it whatsoever. It was a totally unprovoked attack.”

Following the vicious assault, Evie was found bruised and bleeding on the steps of the shopping centre by a passer-by, who called for a taxi to take her home.

Maureen said: “Evie was kicked in the face. She’s got a big bruise on the side of her face from the ear to the nose. She has scratch marks and hand marks on her neck where she was choked.

“Evie is quite shook up. She doesn’t want to go out. I think it’s scared her because reality has set in – with her heart condition, it could have been a totally different story. If that kick to the face had hit her in the chest, she wouldn’t be here.”

The incident was reported to the police, and Maureen said Evie would not be attending school until the bullies had been dealt with.

DON’T MISS: Meghan claims she quit because was not valued for her brains

Academy of St. Nicholas head teacher Jenny Sing said: “Police are involved and we will work with the police. At this time I’m not aware of who these students are, or any specifics of the incident, because that hasn’t been reported to us.

“If the students who assaulted Evie are found to be from this school, they will be dealt with and sanctioned according to the school’s policy.”

She added that the school had contacted Merseyside police for more information.

A police spokesperson said: “We received a report at 1.45pm on Saturday that a teenage girl had been assaulted on Friday, October 14.

“The girl is reported to have been near the stairs outside St John’s shopping centre at around 6.30pm when she was assaulted by three girls.

“The girl suffered swelling and bruising to her face during the incident.

“CCTV and witness enquiries are being carried out.”