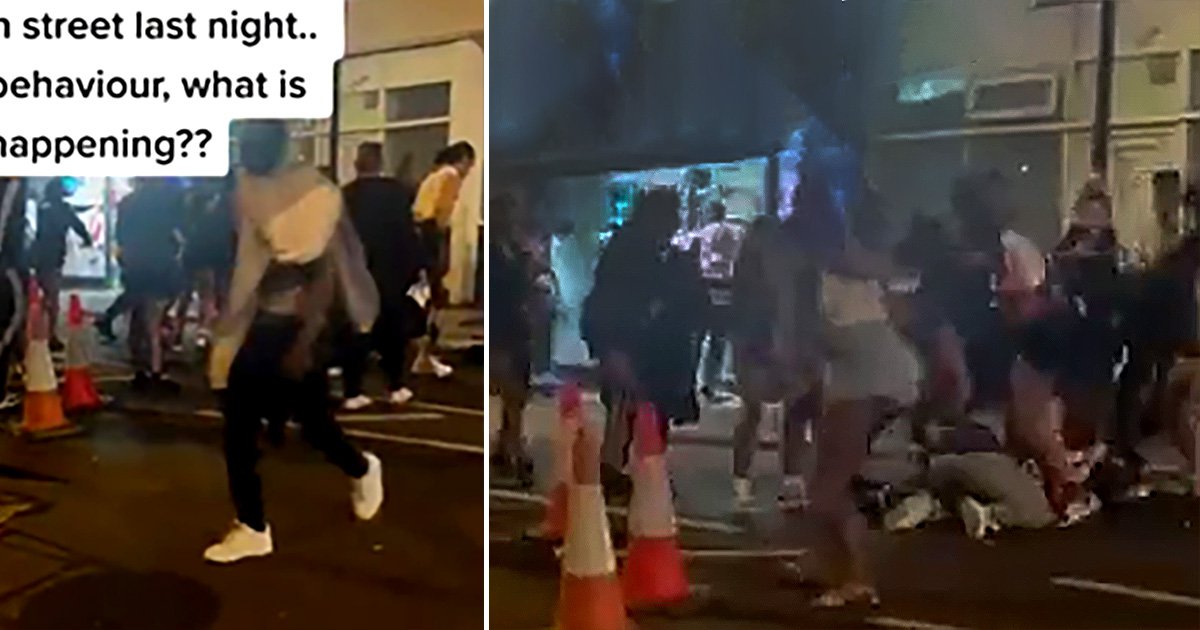 A 19-year-old woman was taken to hospital after a swarm of thugs punched and kicked her in the head in south London.

Earlier, the large group of youths raided a convenience store for alcohol and sweets and smashed doors and windows, a shopkeeper said.

The mob was caught on camera surrounding their victim and attacking her from all angles as she lay on the street in South Norwood at around 10pm on Saturday.

Police showed up, the crowd dispersed, and the woman was taken to hospital for non-life threatening injuries, officers confirmed.

It is still not clear what prompted the attack, but a member of staff at nearby Yogi Newsagents described what happened just before.

They told MyLondon: ‘Around 10 or 15 of them came inside and were stealing sweets, stealing alcohol, trying to get into the back. There were hundreds outside.

A woman is repeatedly kicked and punched in the head by a group outside a shop yesterday, it is believed to be on Portland Road in South Norwood. Crowds dispersed when police arrived. https://t.co/Ju7SzBnKBw #fyp #news pic.twitter.com/He5B23Nev1

‘We tried to force them out and put the shutters down and they started breaking things, smashing the doors and windows, they’re broken now so it’s a lot of damage and we don’t know when it will be fixed.

‘It was about 15 or 20 minutes until the police arrived and they ran off.’

A Metropolitan Police spokesperson said: ‘Officers attended and it was reported that a 19-year-old woman had been assaulted by another woman.

‘She was taken to hospital where her injuries were assessed as not life threatening.’

Police are still trying to establish exactly what happened and no arrests have been made yet.