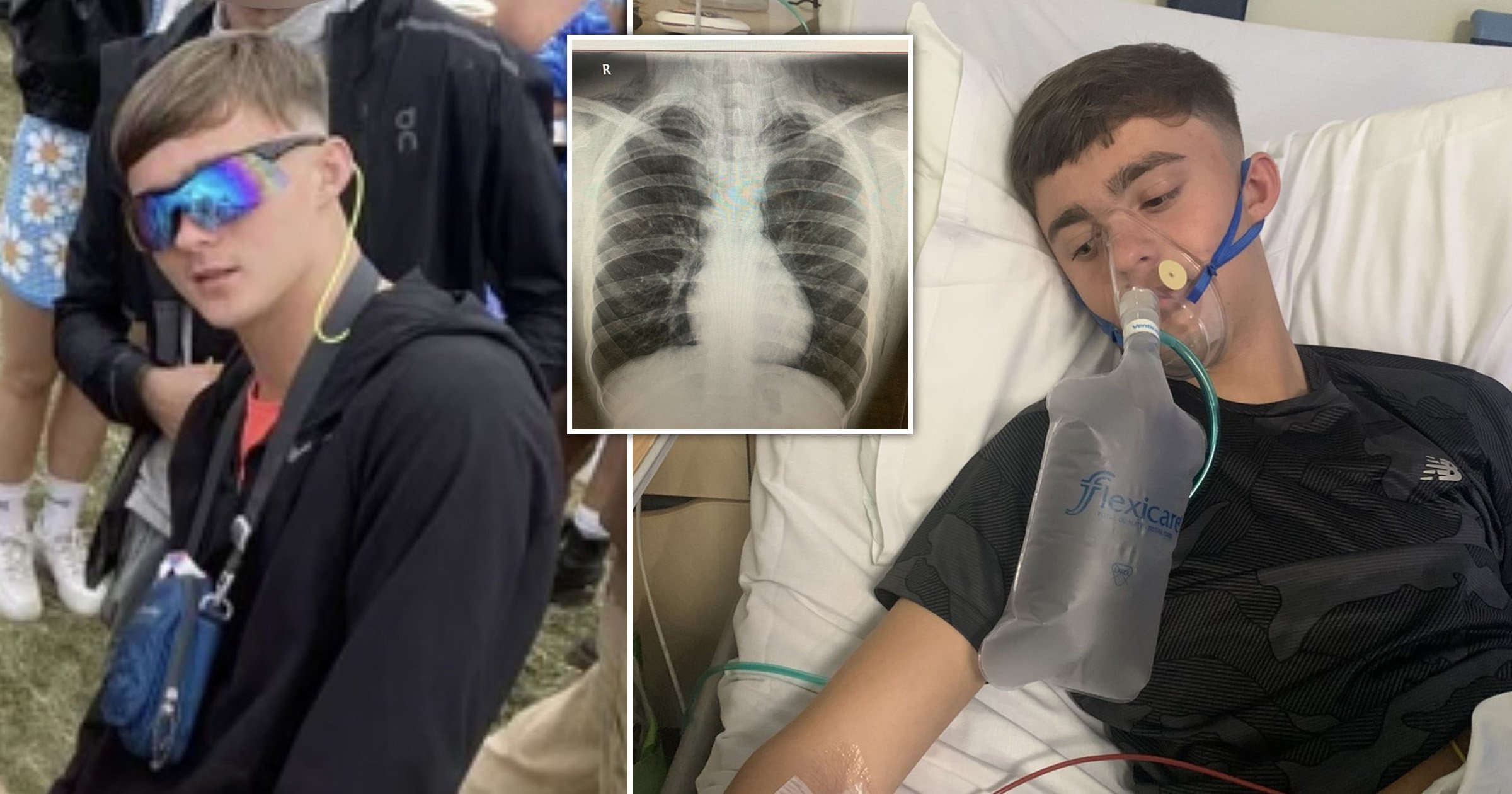 A teenager is lucky to be alive after his lung burst after inhaling laughing gas at a music festival.

Alex Littler, 16, inhaled nitrous oxide at Parklife Festival in Manchester. But on the Monday he was rushed to hospital after he complained of a swollen neck, breathlessness and that his chest felt like ‘popping bubble wrap’.

He was forced to confess to his mum, Cathy McCann, 44 and doctors about inhaling the laughing gas.

At the hospital, Alex was diagnosed with a ruptured and leaking lung with doctors telling him he was lucky to be alive.

But they highlighted there was still a risk the 16-year-old would need surgery to remove air trapped around his heart and lungs.

Thankfully an oxygen mask that was left on overnight removed the trapped air without Alex requiring surgery.

Since being in hospital, Alex confessed he’s previously used the drug but has vowed to never take it again.

It has left his mum Cathy, from Ellesmere Port in Cheshire, distraught after the ordeal.

This is some information about nitrous oxide, according to Frank:

Effects on your body

Can give you a headache and/or stop you thinking straight.

How long it takes to work

How long the effects last

It is dangerous to inhale directly from the canister as it is impossible to regulate the speed at which the gas leaves the canister – this can cause trauma to the respiratory system. The pressurised gas is also very cold and can cause frostbite of the lungs. If balloons are used, it can be hard to judge how many balloons to inhale. Too much nitrous oxide can make you faint, lose consciousness, or suffocate.

She said: ‘He’s said it’s the worst thing he could have done. He didn’t realise himself what the dangers were and he did it because all his mates were doing it.

‘The gases can affect on your spinal chord, go to your brain and deaden your brain. I was beside myself because I didn’t know the full facts about these gases. He was petrified.’

‘His friends are devastated, they’ve been on the phone constantly, putting posts on Snapchat saying they don’t want to see anyone doing balloons.

‘I don’t think half of them knew the depths of what they can do. He’s been told by doctors, if he does it again, he’ll be back in hospital because he has a weak spot on his lungs now.

‘It’s a danger because if it hadn’t repaired itself it’s going to make a bigger hole and it would have been fatal.

‘He would have ended up dead or paralysed or brain dead.

‘Alex was totally shocked. That’s when it hit him – seeing your mum sitting there crying because we’re a close family.’

Cathy and Alex have decided to share their story to warn others about the dangers of taking laughing gas.

She said: ‘No one knows the depth and consequences. Sixteen-year-olds are dying, people have messaged me saying their son died.

‘I want to put it out there, the dangers of it for parents as well, not just the kids. They don’t know what’s happening, it’s happening under everyone’s noses.

‘He’s not in trouble because it’s been that much of an ordeal, he’s learnt a massive lesson so I didn’t need to say anything to him.’