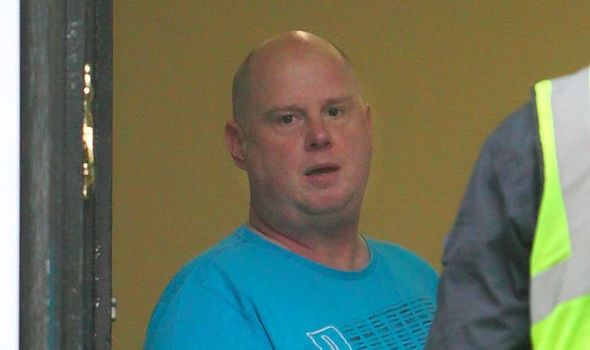 Mark Marshall, who was born Mark Castley and went by a number of aliases, once posed as an ex-MI6 spy to dupe the family of disgraced Adam Johnson out of £170,000. He smuggled a corrosive substance past security into Inner London Crown Court where he was being sentenced for a new fraud offence in April 2019.

The inquest heard he may have smuggled the substance into court in his shoe and added it to the water bottle during a break in the sentencing.

He died in hospital two months later from multiple organ failure, due to damage to the oesophagus from acid ingestion and diabetes.

He also suffered severe chemical burns to his face and neck, his inquest heard.

An inquest jury ruled today the death was suicide, and said Marshall’s actions were “pre-meditated to evade typical security measures at the court and dock”.

Jurors also noted a suicide risk form was not filled out by probation service and a security policy banning food and drink in the dock was not adhered to – both of which contributed to his death.

Southwark Coroner’s Court heard Marshall sipped and threw the liquid over himself after hearing he was going to prison for two years and four months for buying £77,000 of photography equipment with fake cheques and flogging it to cash converters.

During the inquest, Marshall’s widow Theresa Mulberry said the 55-year-old career conman had been diagnosed with a personality disorder and tried to take his life at least five other times while in prison to ‘get himself out of a situation he didn’t like’.

She said: “He was extremely intelligent, very sporty and was from a fairly well-to-do family.

“He was running his own business from a very young age as a tennis coach at a very high level and was mixing with high-profile sportspeople.”

She told the inquest he was handed his first suspended prison sentence in 1998 and then was “in and out of prison” for the rest of his life.

She said: “Generally the crimes he was committing involved people who you may know from the media. Because of this he changed his name a lot – obviously trying to evade people. And that was Mark’s life.

“His life was a cycle, it was always repeating. If he was in prison there was a suicide attempt or self harm and he was moved to another. He was never nasty or violent, but he was always motivated by financial gain.”

When he was arrested for the latest fraud in 2016, Marshall stabbed himself in the neck in police custody and suffered a stroke, the inquest heard.

Despite the most recent suicide attempt, a probation service worker did not think Marshall was at “imminent risk” of making another attempt.

Marshall went under the name Mark Hill-Wood in 2016 and told the family of disgraced footballer Johnson he had spent 25 years working for intelligence services GCHQ and MI6, and could unearth evidence to help get the paedophile off the hook.

In 2014, he conned the ex-wife of bankrupt business tycoon Scot Young out of £14,000 after persuading her to hire his firm Fullproof Intelligence to help find the late Mr Young’s fortune.

In April 2014 using the name Phillip Buffett, he defrauded Harrods out of a £216,000 Hublot watch and a second watch, camera and designer clothes worth £28,000.

In 2011, using the name Mark Cas, the fraudster was sentenced to three years for conning several elite UK athletes with offers of lucrative sponsorships ahead of the 2012 London Olympics.

Dock officer Denesha Duff told the inquest she looked over at Marshall after the judge had finished sentencing and saw him bring a flask up to his mouth.

She said: “I stood up saying ‘what are you doing?’ interrupting the judge and he took a quick swig. The bottle and the lid then dropped to the floor on my right. I flinched to get away and the defendant screamed ‘acid, acid’.

“He was holding both hands to his face and I shouted out and kicked the red alarm in the dock and shouted in the courtroom to call for help.”

Court usher Marie Plum said in a statement: “Mr Marshall started shouting and wailing something inaudible from the dock and causing a commotion.

“I saw he had his head in his hands rocking backwards and forwards, he shouted and wailed… I could hear Mr Marshall shouting ‘water, water, acid’.

“He was in a lot of pain. The skin on his face turned white and peeling. His mouth inside and out was burning and his skin was reacting badly.”

In their conclusions, the jury said: “On the 29th April 2019, Mark attended his sentencing with his belongings which included a metal bottle and a tube.

“He appeared to undergo a sip test that was inadequately supervised by front of house security. He had an opaque tube with printed brain scans in it, which was not searched.”

The jury said Marshall appeared to take an “item” from his right shoe in the court waiting area after passing security and went into the toilet with part of the brain scan tube.

He then entered the courtroom with the bottle but without the tube, and left the bottle outside the dock while undergoing a search, jurors said.

The record of the inquest states: “Mark leaves the courtroom during a break just before sentencing. We infer that the water bottle and acid granules were combined during Mark’s second visit to the toilet during the court break.

“He then enters the court and then the dock with the bottle. The dock officer does not execute SOP055 which states that food and drink is not permitted in the dock. There was also no escalation to alert others of the prohibited item entering the dock.

“The dock officer requested Mark to complete a sip test but does not challenge Mark when he declines.

“The dock officer completes a type B search. Mark is allowed to keep his property whilst in the dock. After sentencing, Mark picks up his bottle containing acid and drinks from it.”

Samaritans (116 123) samaritans.org operates a 24-hour service available every day of the year.

If you prefer to write down how you’re feeling, or if you’re worried about being overheard on the phone, you can email Samaritans at [email protected], write to Freepost RSRB-KKBY-CYJK, PO Box 9090, STIRLING, FK8 2SA and visit www.samaritans.org/branches to find your nearest branch.