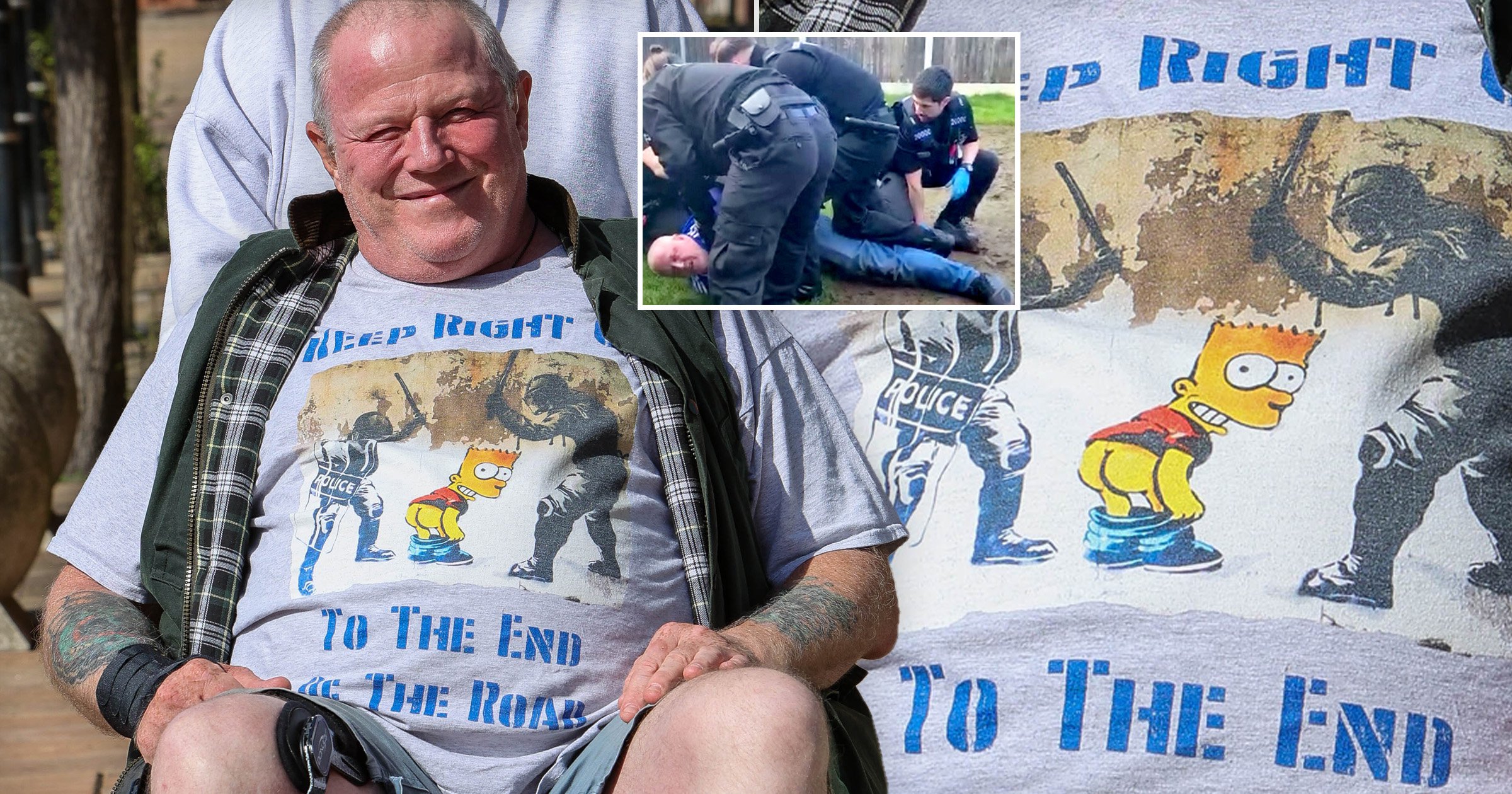 A terminally ill retired lecturer who mooned a speed camera to tick it off his bucket list has appeared in court with a t-shirt of a bare-bummed Bart Simpson.

Darrell Meekcom, who has multiple system atrophy (MSA), was charged with public order offences after showing his backside to a mobile speed camera van for ‘a good laugh’ in Kidderminster last November.

Video footage showed the dad-of-two being bundled over by six cops and arrested in his back garden on the same day.

The 55-year-old, from Worcestershire, was initially arrested on suspicion of indecent exposure before being bailed and interviewed under caution in January.

Last month he was charged with two counts of using threatening behaviour likely to cause harassment, alarm or distress and obstructing a constable in the execution of their duty.

Mr Meekcom previously said he was ‘gobsmacked’ by the ‘heavy-handed’ actions of West Mercia Police, accusing the force of ‘outrageous bullying’.

He also hit out at the ‘trumped up’ charges, claiming officers were ‘looking for any little thing to get me on’.

He said: ‘It’s pathetic. What an absolute waste of public funding.

‘This is an escalation of what they’ve done. You can’t keep changing it and altering it until you find something that fits.

‘I pulled my trousers down and mooned at a speed camera. That’s all I did.’

He went on to suggest officers were ‘essentially admitting that there was no offence committed in the first place’, with ‘nothing on this charge sheet’ indicating an initial offence – the mooning – had taken place.

Mr Meekcom continued: ‘Why were they kicking living daylights of me in the back garden if there was no offence committed?

‘So all this is after they bashed my doors in, causing thousands of pounds worth of damage, for no good reason. The police escalated it and I am furious about it.

‘I never thought it would get to this point … My health will not, and has not, got better since all this started.

‘The stress of all this has made my health worse. It is unbelievable.’

He said: ‘You may have seen something of this in the media because the prosecution case is that he decided to drop his trousers at a speed enforcement van.’

The registered nurse, who also has Parkinson’s Disease and heart and kidney problems, denied all three charges in a 10-minute hearing.

Appearing in court today in a wheelchair, he wore the Simpsons top showing the rebellious cartoon character showing his bum to police officers in riot gear.

It also features the slogan ‘keep right to the end of the road’, which is a reference to an anthem sung by supporters of Birmingham City football club.

Mr Meekcom’s mooning of a speed camera – which took place while his wife Sarah bought bread from a nearby Tesco Express – made international headlines last year when the incident occurred.

It went on to prompt a graffiti artist known as ‘The Scottish Banksy’ to spray paint the Simpsons artwork on an underpass near the wheelchair user’s home.

While Rebel Bear’s work was later defaced by vandals, it featured on the shirt Mr Meekcom wore to court earlier today.

He spoke only to confirm his name, address and to enter a not guilty plea to all three charges before the case was adjourned for a trial at the same court on August 2.