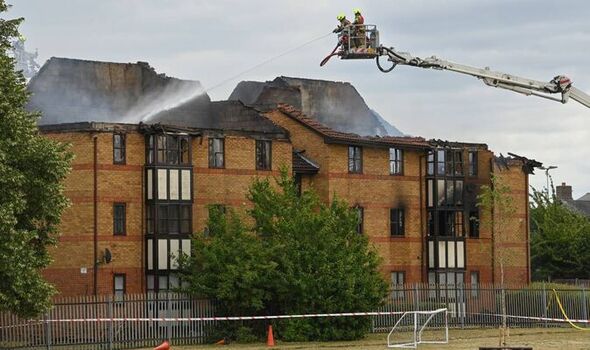 One was airlifted with leg injuries and the other two, one of whom was a firefighter, suffered smoke inhalation. The aftermath of the explosion was described as an “inferno” at the block of flats.

The fire engulfed the entire building in Bedford and caused a large section of the roof to collapse.

Bedfordshire Police Chief Supt John Murphy said: “There is a possibility there will be more fatalities discovered in the coming days as we continue to search through the scene.”

Two bricklayers told how they went to the aid of two men.

Michael Moxam, 45, and Mark Waggott, 37, were the first on the scene and found a man in his 20s unconscious on the ground.

A witness said the man had been “projected” from his flat by the explosion.

Michael and Mark then went to help a second man in his 50s. Michael said: “We drove over the bridge at around 9.40am and saw the smoke.

“The younger guy was face down and unconscious. The other was screaming in agony with blood on his arm. I think he’d broken his hip.”

Michael said they pulled the men away from the building as they feared a further explosion at the building’s mains gas point.

Mark, covered in blood from helping the victims, said: “The heat of the flames was on you when you tried to pull them away.”