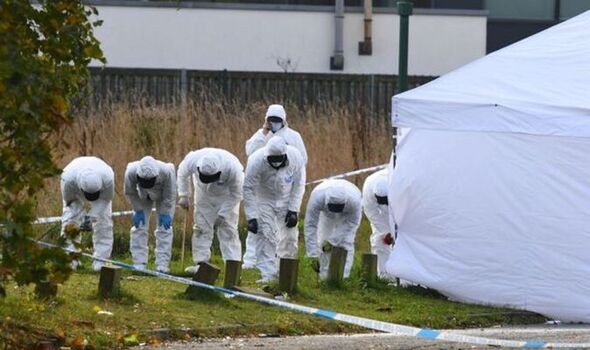 A gunman emerged from the bushes and shot two men in the legs at a bonfire.

It is understood that, due to the fireworks on Saturday night, November 5, most locals did not hear the gunshots.

Emergency services scrambled to the scene in Litherland, Merseyside, at around 11.20pm, and the two victims were rushed to the hospital with serious leg wounds.

Their injuries are not believed to be life-threatening.

It is unclear whether the gunman deliberately chose Guy Fawkes Night as a cover for his attack, reports The Liverpool Echo.

The shooting was the second eruption of gun violence in a week, after grandmother-of-five Jackie Rutter was killed as she stood at the doorway of her home in Meadowbank Road, Moreton, on Sunday, October 30.

Ms Rutter’s death was the first firearms-related death in Merseyside since the fatal shooting of nine-year-old Olivia Pratt-Korbel on August 22.

Today, November 8, residents around the scene of the shooting said the gunman was believed to have “come out of the bushes” of the parkland and approached two men, who were standing around the remains of the bonfire.

One woman, who did not wish to be named, said: “I was at home when it happened, but I popped my head out when I heard a commotion.

“I just saw that it was all taped off and the police were everywhere.

“Some of the people outside said he had come out of the bushes and shot them in the legs.

“The thing I don’t understand is there would have been a fair few people standing around. It’s upsetting, it really is.”

A man living close to the scene said: “We went down [to the bonfire] around 7pm and there were a lot of people there. I have a little girl, so we left, and she was in bed by eight.

“I was in the back room playing video games – I had the window open, and I heard a few bangs that sounded different to the fireworks, like irregular bangs.

“I said to my mate, who I was playing with, ‘that didn’t sound like fireworks, there were four of them.

“I went down around midnight and popped my head out the door, and all I saw was flashing blue lights and police. I thought, what the hell has gone on here.”

Another resident said she had been told the victims were “nice lads,” and one of them had been talking to a woman as he was shot.

So far, there have been no arrests, and police are hunting a suspect described as white and dressed all in black who fled the scene on foot.

Witness, CCTV and forensic enquiries are underway, according to police.

Detective Inspector Andy Dykes said: “This was a horrendous incident which we think was witnessed by multiple people attending a bonfire nearby.

“We have spoken to some of these witnesses and would like to ask anyone who has yet to come forward to do so as a matter of urgency, to enable us to have a full understanding of exactly what happened.

“Your account, dashcam, CCTV or doorbell footage may well be vital in tracking down whoever who responsible for this terrible act.

“We are keeping an open mind as to the reason behind this shooting, but it initially appears to have been targeted.

“However, we recognise that people who saw it happen or live locally will be concerned and perhaps feel fearful.

“Officers will be in the area today carrying out our investigation and I’d encourage people to speak to them, or if not comfortable doing so, passing information on anonymously via Crimestoppers.

“Guns and those who use them have no place in our communities. Working together, we can find the person responsible and remove them and their weapon from the streets.