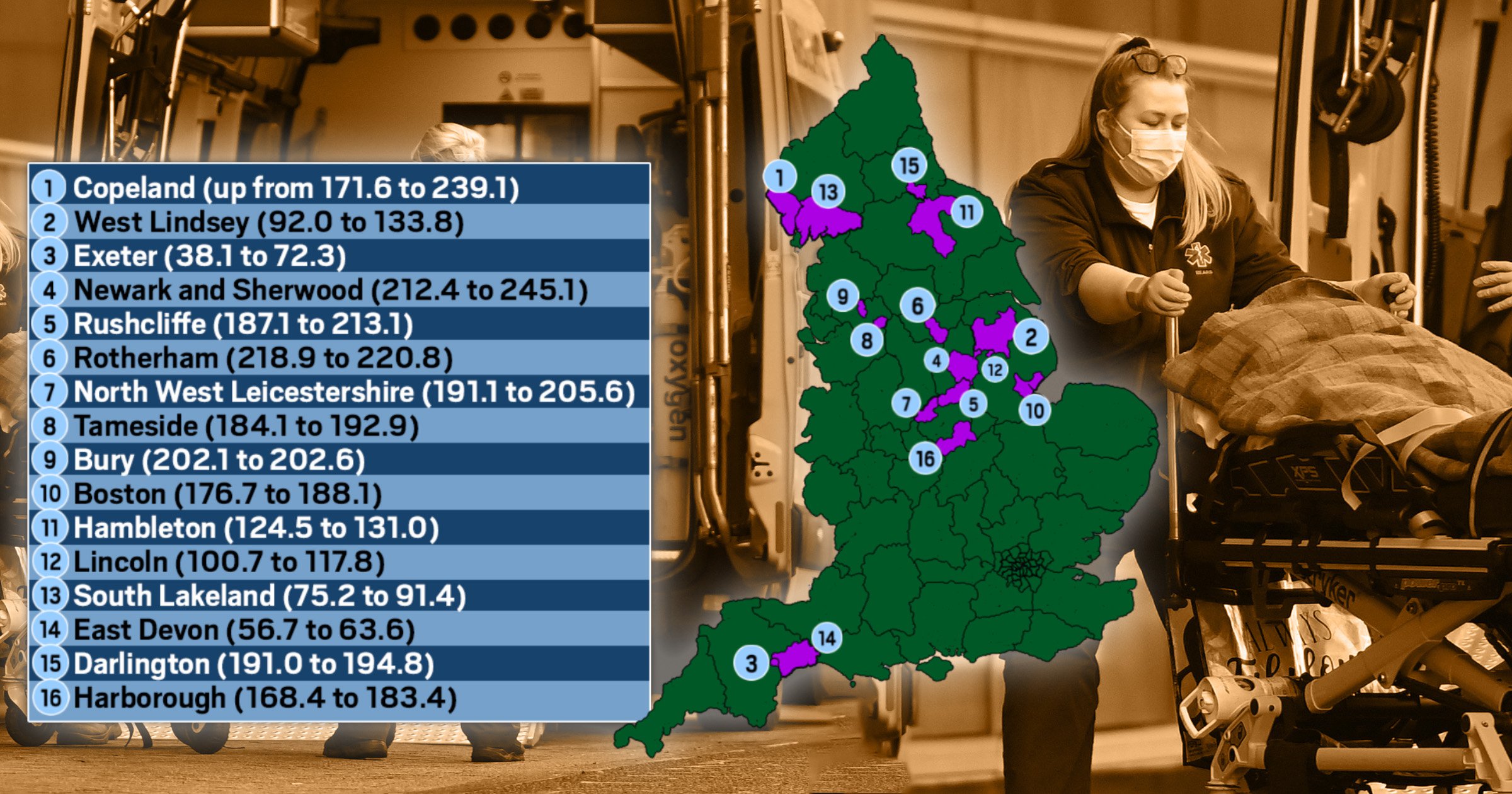 Coronavirus cases are increasing in 16 areas of England with the East Midlands emerging as a new regional hotspot, latest public health data shows.

Copeland in Cumbria has the fastest rising infection rate after 169 new cases were recorded in the past week.

It is not clear what has caused the surge in Copeland, which has previously had low infection rates.

A spokesperson from Cumbria County Council said Copeland’s relatively low population (around 68,000) ‘means it only takes a small number of outbreaks to effect an increase in overall rate’.

Copeland Borough Council’s Carl Walmsley suggested people may have let their guard down and urged residents to follow the rules.

He told local paper The News and Star: ‘I was deeply saddened to hear the latest statistic. I think a lot of people must have let their guard down after we were announced the best figures in the country not so long ago. I cannot stress enough that this is nowhere near over, we need to remain vigilant and follow guidelines at all times.’

In Cumbria as a whole, rates have decreased by around 18%.

According to a Public Health England surveillance report published today, the East Midlands has the highest rate of any region.

The West Midlands recorded the second highest rate, while rates are lowest in the South West.

A break down of local authority data shows Covid cases are rising in several boroughs in the Midlands.

Corby in Northamptonshire has the highest rate in England, with 228 new cases recorded in the seven days to February 13.

Other areas where Covid cases are rising include West Lindsey; Lincolnshire and Newark and Rushcliffe in Nottinghamshire.

The 16 areas where coronavirus rates are rising in England

However, the data from Public Health England shows infections are falling in 95% of the country.

Numbers are dropping in Middlesbrough and St Helen’s in Merseyside, which have the second and third highest rates in the country after Corby.

Scientists tracking the epidemic say overall there has been a ‘strong decline’ in levels of infections in England since January, showing lockdown is working.

Imperial College London’s React study found infections have dropped by two-thirds across England, with an 80% fall in London, the former epicentre of the virus.

Prof Paul Elliott, director of the programme at Imperial, said the drop in infection rates was ‘really encouraging’.

However, researchers found the prevalence of the virus remains at levels similar to those recorded in late September, with one in every 200 testing positive between February 4 and 13.

It comes as Boris Johnson prepares to receive new data on the effect of vaccines on the spread of coronavirus ahead of unveiling his roadmap out of lockdown on Monday.

Reports suggest schools will reopen as planned on March 8, but parents will be responsible for testing their teenage children for Covid, rather than teachers.

It is hoped that some outdoor activity could be allowed after this, with the reopening of non-essential shops planned for the end of March and the opening of the hospitality sector earmarked for April or May.

She suggested people would not have to wait for their loved ones to receive their second dose of a Covid vaccine before seeing them.