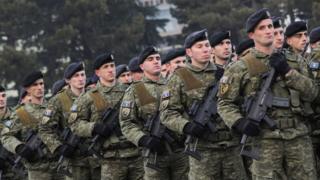 If Kosovo is still committed to a Euro-Atlantic path, it has wandered dramatically off-piste in recent weeks.

First it raised a 100% tariff on imports from neighbouring Serbia. Now its MPs are set to vote on raising an army.

Both these measures run counter to warnings, threats and pleas from both the European Union and Nato.

This in a territory protected by 4,000 Nato Kfor troops since Serb forces pulled out in 1999.

Serbia’s Prime Minister Ana Brnabic is so enraged by the vote she has even talked of a military response. Its president has sought backing from Russia and China.

It does not recognise Kosovo, which declared independence 10 years ago.

What has gone wrong?

How different it all is from three months ago.

All the talk in the Western Balkans was of Serbia and Kosovo swapping territory to bring their long-running dispute to an end, following six years of negotiations brokered by Brussels.

This recent defiance is also a departure from Kosovo’s long-established status as a pet project for Western powers.

So there was an element of biting the hand that has been feeding Kosovo for almost two decades, when Prime Minister Ramush Haradinaj accused EU foreign policy chief Federica Mogherini of “strangling” the talks.

“She has transformed the dialogue on normalisation into a dialogue on territories. This has caused harm to our region,” he said.

His outburst was less about any putative territory swap, which Mr Haradinaj has fiercely opposed, and more a response to repeated European Union rebukes about Kosovo’s unilateral imposition of swingeing taxes on Serbian and Bosnian imports.

“[This] definitely goes against the spirit and letter of co-operation in the region,” said Ms Mogherini on Monday.

“I would expect the government of Kosovo to revoke this decision. But I am still confident that the two sides can fruitfully continue the dialogue.”

Others are less optimistic.

Will Kosovo have second thoughts?

“I am more worried about relations between Serbia and Kosovo than I have been for a long time,” says James Ker-Lindsay, a Balkans specialist at the London School of Economics.

“The dialogue hasn’t been good for a few years, but there was a certain equilibrium. That’s been thrown out and it’s very difficult to see where this is going.”

Kosovo’s determination to turn its lightly armed security force into an army has made things only worse.

One bright spot for Pristina is that the US, perhaps predictably out of step with Brussels and Nato, has endorsed the formation of an army.

Why form an army anyway?

There is considerable frustration in Pristina that the EU has not followed through on a commitment to allow citizens of Kosovo visa-free travel to the bloc’s borderless Schengen zone.

Ten years on from its unilateral declaration of independence from Serbia, Kosovo is still lacking many of the signifiers of statehood. Upgrading the security force to an army would, at the very least, tick a box.

But James Ker-Lindsay believes that “lashing out” will prove counterproductive for Kosovo.

“This is not the way to work with the EU. You don’t start challenging them and being confrontational,” he warns.

He believes that their “protected existence”, with 10 years of EU and US support, has left them disorientated. Now that a new phase with the EU has begun, new rules apply.

Long term, it seems unthinkable that Kosovo would turn its back on Brussels. But, for the moment at least, it is certainly offering a cold shoulder.

The Scottish Parliament wants Westminster to devolve migration powers so it can bypass the tight restrictions in force across the rest of the UK. The…